The Lowdown On CTV/OTV Growth Prospects, And Challenges, For 2021 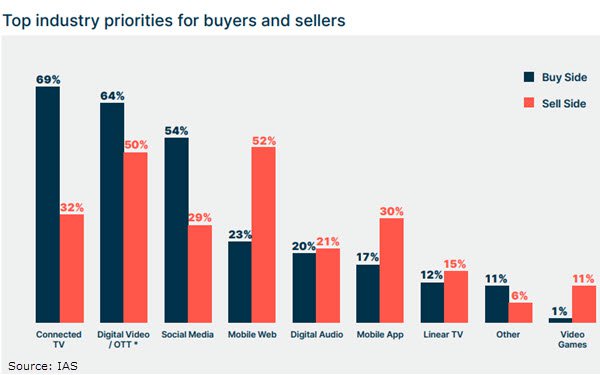 It’s been another active week on the advanced TV front.

Broadcasters continue to push hard to be able to deliver addressable at scale as quickly as possible — the latest development being ViacomCBS’s announcement that it’s successfully delivered addressable impressions within a live national broadcast, via Dish.

The networks’ determination to advance addressable linear isn’t tough to understand. All of the stats and buyer research continue to point to 2021 being a watershed year for connected TV and OTT.

In November, 60% of U.S. advertisers surveyed by the Interactive Advertising Bureau said they planned to shift some ad dollars from linear to CTV or OTT in 2021. Most — 81% — cited targeting and efficiency as the reasons, and 55% cited incremental reach benefits.

eMarketer projections illustrate the implications for advertising spend this year. In October, the researcher estimated that CTV advertising as a whole will increase by 40.1% in the U.S. alone in 2021, to reach $11.36 billion. 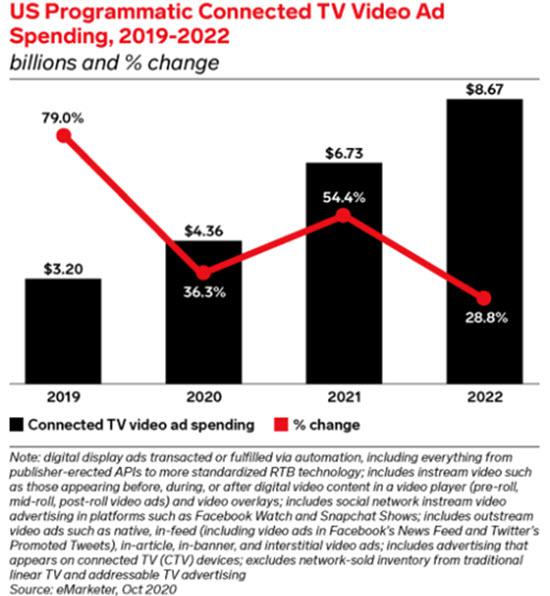 Meanwhile, an Integral Ad Science (IAS) survey of media buyers, publishers, ad-tech firms and other digital experts finds CTV and digital video/OTT by far the most-cited 2021 media priorities among buyers — cited by 69% and 64%, respectively, versus 54% citing social media and 23% the mobile web. (Chart at top of page.)

Interestingly, only a third of the sell-side sample in this research cited CTV as a top priority, although half cited digital video/OTT as a top priority. Seems that many publishers and their tech partners are more focused on mobile opportunities.

But 88% of respondents overall said that advancements in digital video/OTT and CTV technology will accelerate the shift of TV ad spending from linear to digital, and 82% said that such advancements will accelerate the shift in consumer consumption  from linear to digital. Not surprisingly, 80% said CTV provides richer data insights for ad campaign optimization than linear.

Nearly two thirds (62%) of all respondents said that CTV, digital video and OTT have the greatest potential for innovation, with 20% saying they expect innovation in targeting this year, 10% in attribution and 9% in measurement.

The latter two percentages would seem to point to low expectations in the critical but particularly challenging areas of cross-platform attribution and measurement.

The pros interviewed by eMarketer for its programmatic CTV report pointed to cross-platform measurement and a relative lack of addressability on CTV versus other programmatic channels as the biggest continuing obstacles to faster growth for the segment.

“Additionally, a significant portion of CTV advertising is not decisioned on a real-time, impression-level basis,” notes the report. “Large chunks of spending come from upfront or other long-term commitments as part of programmatic guaranteed deals. Those deals don’t provide the flexibility advertisers may be used to in other programmatic display channels.”

“Several people we spoke with on the buy and sell sides indicated they hoped for advances in technology that would allow a greater degree of addressability in CTV and a more sophisticated decisioning set-up for programmatic guaranteed buys in all channels. Advances in cross-channel identity and measurement should help here, and the IAB also recently rolled out a version of ads.txt and app-ads.txt for the CTV environment, which should help ease concerns about fraud and fragmentation in the market.”

Of course, measurement, ad fraud and other challenges are by no means limited to CTV and OTT.

Here are the biggest current challenges across the industry, according to the IAS survey respondents: 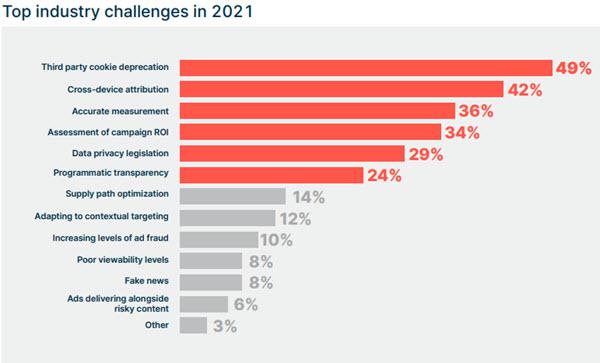 Which media are most prone to those challenges?

At least in the estimation of the IAS respondents, linear TV and social media are by far the most problematic, followed by mobile. Far fewer pros indicated that CTV and digital video/OTT are the most challenged: 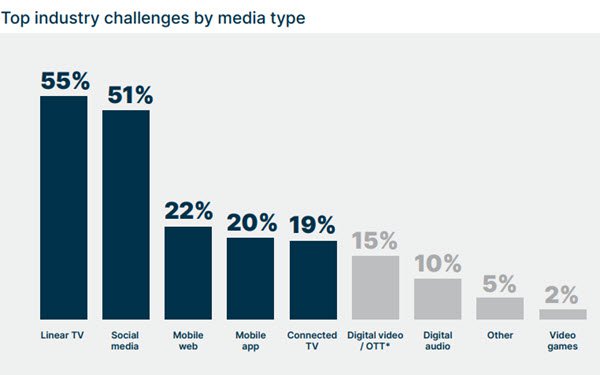