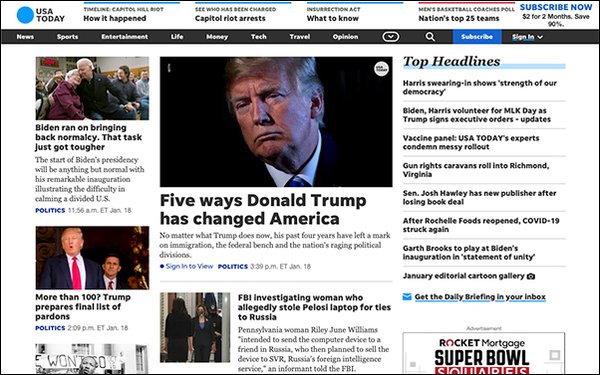 Gannett Co., whose newspapers include USA Todayand 260 other dailies, set a goal of reaching 10 million paid digital subscriptions in the next five years. The move comes as the publishing industry faces an ongoing decline in advertising sales, decimating newsroom employment.

Gannett CEO Mike Reed last week announced the plan to boost digital subscriptions at an investor conference. He cited The New York Times as a news publisher with a similar goal of reaching 10 million subscriptions.
"That's our single biggest opportunity, and I think that our growth will accelerate," he said in a video interview at the Needham Virtual Growth Conference.
Gannett's digital subscriptions grew 31% to 1.03 million in Q3 2020 from a year earlier. The growth contrasted with a 20% decline to $814.5 million in revenue as print ad sales dropped by 31% to $208 million.
USA Today doesn't have a digital paywall for its website, though readers can subscribe to an ad-free version. The company is weighing whether to add a digital subscription, the newspaper reported.
Gannett forecast that print ad revenue will decline from 26% of total revenue last year to 19% by next year. Circulation revenue will remain steady at about 44% of the total, while digital ads and marketing services will expand from 30% last year to 37% by 2022.
Gannett's "same store" revenue from digital advertising and marketing services fell 14% in the third quarter to $121.3 million, given the negative effect of the coronavirus pandemic on media spending. However, its publishing revenue nearly doubled to $732.2 million after being acquired by New Media Investment Group Inc. in November 2019.
Last month, Gannett said it had repaid about $647 million in debt with the proceeds of a refinancing plan, real-estate sales and excess cash. The company's total debt of about $1.58 billion included $1.08 billion in an 11.5% term loan and $497.1 million in 6% convertible notes issued in November.