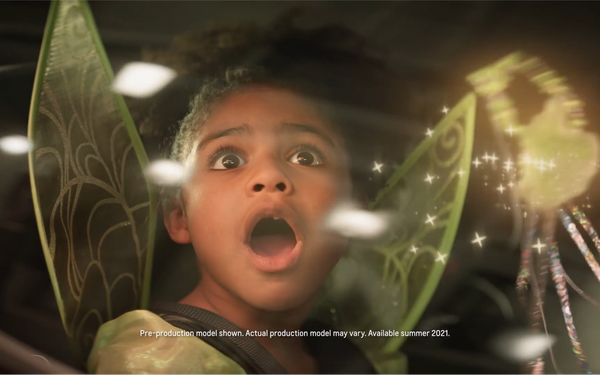 Chevrolet is teaming up with Walt Disney World to reveal the all-electric Chevrolet Bolt EUV and Bolt EV on Feb. 14.

The partnership will play up how GM is taking “the next steps on its journey to a zero-emissions future” as well as "show how magic can take place when the imagination is electrified.”

A 15-second teaser that can be viewed on Chevy’s EV page gives a glimpse of the video series collaboration to come. Disney’s Alliance Creative team drove the creative development, working closely with Chevrolet and Commonwealth//McCann, according to a spokesperson.

“Realizing the dream of an all-electric future will require more than just technology — it’s about having the desire, imagination and ingenuity to build a better tomorrow,” per the automaker.

During CES on Jan. 12, Chevy provided the latest Bolt EUV sneak peek. A graphic offers a first look at the steering wheel on the 2022 Bolt EUV, equipped with Super Cruise technology, a hands-free driver assistance system for enabled roads.

The 2022 Bolt EUV, the first electric vehicle from Chevrolet to feature Super Cruise, and the refreshed Bolt EV will go into production this summer.

The brand has continued as the lead sponsor of the EPCOT Test Track ride, first opened to the public in 1999 and then redesigned in 2012.

Park goers are invited to “cruise over to the gleaming Chevrolet Design Center to create your own virtual concept car. When you’re done, buckle up in a 6-passenger SIM Car and take it for an exhilarating spin on the test track.”

The relationship even extends to overseas properties. Shanghai General Motors is a Shanghai Disney Resort’s long-term strategic alliance participant, per an agreement signed in 2014. As the resort’s official vehicle, the Chevrolet brand has a presence in Shanghai Disneyland.