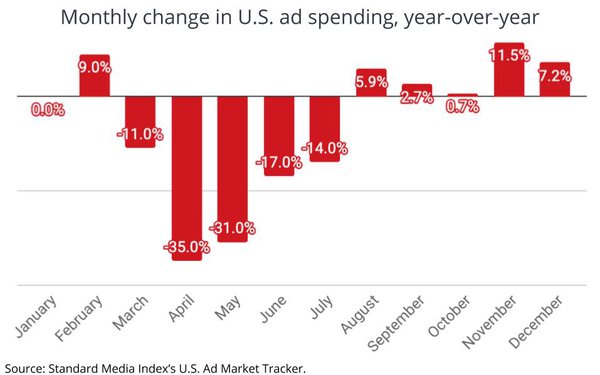 The U.S. advertising economy had its fifth consecutive month of expansion in December, rising 7.2% over December 2019, according to the final 2020 data generated by the U.S. Ad Market Tracker, a collaboration of MediaPost and Standard Media Index.

The data, which is based on actual media buys generated by the major agency holding companies, demonstrates U.S. ad demand has firmly rebounded from the effects of the 2020 COVID-19 pandemic, which triggered a five-month advertising recession between March and July.

Not all media are benefitting evenly, however, as the national TV advertising marketplace actually saw a 9.7% decline in December 2020 vs. the same month in 2019. Digital media, by comparison, saw demand soar 30.7% year-over-year in December, supporting the notion that many brand marketers have shifted more of their budgets toward digital -- especially ecommerce and performance media buys -- during the pandemic.

The expansion also continues to be driven mainly by the biggest advertisers, as the top 10 ad categories surged 9.5% year-over-year gain in December vs. a relatively tepid 1.5% expansion for categories 11-plus.