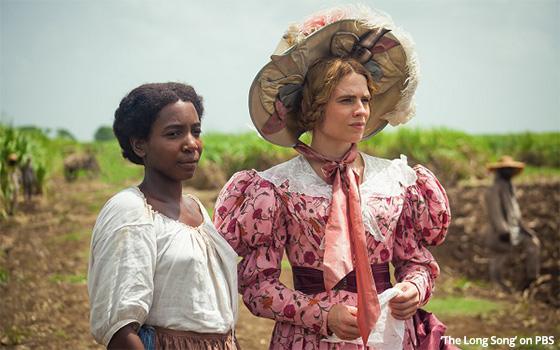 A three-part, dramatic miniseries about the final years of slavery in 19th-century Jamaica breathes fresh air into the stale drawing rooms of PBS’ “Masterpiece.”

This miniseries -- titled “The Long Song” and airing on PBS stations for the next three Sundays (January 31-February 14) -- is no mannered, drawing-room, period piece of the sort that have come to dominate “Masterpiece” in the years since “Downton Abbey” ended its run in 2016.

Instead, it is a riveting re-creation of life on a Jamaican sugar-cane plantation as seen through the eyes of one young female servant named July, played by Tamara Lawrance (above photo, left).

She serves as narrator and storyteller from a vantage point that is evidently a number of years later than the miniseries’ 1830s time frame.

Her older self is seen in Episode 1 leading a peaceful life by all appearances -- which implies that the events she is describing are long past.

Her story begins in a year that was not nearly so serene -- 1831 -- the year when a destructive and widespread slave rebellion broke out on Christmas and shook the island colony.

This real-life Caribbean revolt by an estimated 60,000 black slaves in Jamaica almost succeeded until it was eventually quashed 11 days later by British imperial forces.

Imported from British television (where it has already aired), “The Long Song” is adapted from the novel of the same name by the late Andrea Levy. If the book (which I have not read) is anything like this miniseries, then it is probably well worth reading.

This miniseries emerges not only as a welcome departure from what has been seen in recent months and years on “Masterpiece,” but also represents a detour into new creative territory for PBS generally.

This is an edgy, intense miniseries for PBS. It doesn’t pull its punches when depicting some of the most odious and humiliating aspects of slavery such as punishments with whips, sexual assaults, summary executions and the tearing of children away from mothers.

“The Long Song” even starts with a content warning -- which is likely not unprecedented for PBS and “Masterpiece,” but certainly rare.

For better or worse, “The Long Song” looks and feels like a miniseries made for HBO or Netflix, which in the context of this review is meant as a compliment.