Silencing Of Trump Produces Strange Peace Across The Land 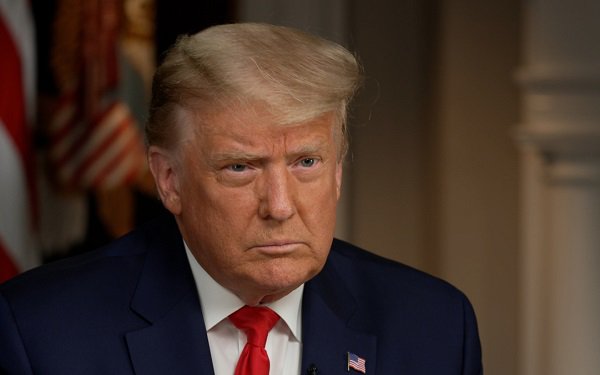 The silence has been deafening.

For the record, generally speaking, the TV Blog is against any curbing or curtailment of free speech and free expression -- particularly by our great and powerful social media platforms.

But I have to admit: Ever since ex-President Trump was muzzled by the social-media industrial complex, our world does seem noticeably calmer, more peaceful and, dare I say it, serene -- despite all of the big problems that still dog us all.

Without access to social media, Trump is no longer maniacally applying his overworked thumb tips at all hours of the day and night to banging out angry tweets on his onyx-and-gold presidential iPhone (note: the existence of such a phone has only been rumored, but never confirmed).

Now that these outbursts have been ended for the first time in more than four years, it has been interesting to re-experience what life was like before Donald Trump ever formed the Twitter habit and then turned all communications norms on their head.

Under the reign of Donald Trump, official communiques from the very pinnacle of our government were no longer edited, reviewed, revamped or revised.

Instead, these messages would just pop into the then-president’s brain at any moment and within seconds, out they went, decidedly unfiltered, to edify, entertain and/or alarm the globe.

Along with so much else that Trump did to alter the office of the president and its traditions, Trump’s command of social media and the utterances he disseminated provided a kind of continual fuel for the news media, both for him and against him, that reported on his every tweet.

It was like having a roaring fire in a fireplace for four years and never experiencing a shortage of wood to throw on it and keep it going.

Our television news media may have loved and supported Trump (Fox News) or hated and vilified him (all other TV networks), but they all had one thing in common during the Trump years: They all benefited from his presidency.

Whether for or against, since the day he rode that escalator down to the Trump Tower lobby in June 2015 to announce his candidacy for president, Trump was the Ratings Magnet-In-Chief (a nickname coined right here in a TV Blog in November 2016).

As has been pointed out here from time to time, the maw of the great media whale needs to be filled and fed around the clock (not unlike the proverbial roaring fire referenced above).

And Trump and his antics provided a constant and abundant source of subjects and ideas for countless news stories and talk segments on the news networks -- not to mention all of the thousands of monologue jokes on the late-night shows plus all of the sketches on “SNL.”

Now, with the Trump era coming to a close, and with Trump unable to communicate in the manner he prefers -- spontaneously and without discernible forethought -- our news media (and our entertainment media too) are now faced with life in a post-Trump world.

Or to put it another way: Who will benefit in the post-Trump shakeout, and who will not? That is the question.

Here in the early days of the Year One A.T. (after Trump), the TV Blog believes it has an answer, which is: Only Fox News Channels stands to benefit.

Why? Because now the news network with the relatively new slogan “Standing up for what’s right” has a government to harangue morning, noon and night because both houses of Congress and the White House are dominated by Democrats.

If the history of right-leaning media is any guide here, then Fox News Channel will benefit by positioning itself in opposition to everything the Democrats do and stand for.

The TV Blog’s theory is that for right-leaning media, being against something is always more potent than being for something. Look for Fox News to do even better in the post-Trump years than it did during his administration.

As for all the rest of the TV news media who stood in lockstep opposition to Trump for four years, they suddenly have nothing and no one to oppose anymore. Good luck to all of them in their efforts to hold on to the audience gains they made opposing Trump.

Now what are they going to do -- praise President Biden, Vice President Harris and Speaker Pelosi all day and all night? That’s no way to build ratings in American news media, where negativity and criticism trumps positivity and praise every time.