Who Knows? This Super Bowl May Taste Even Better 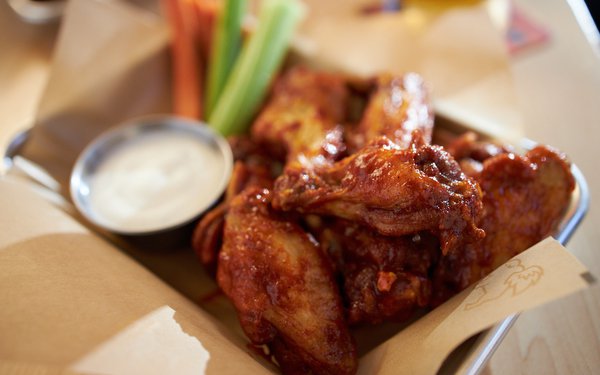 There are plenty of reasons restaurants should be glum about the coming Super Bowl. Amid a dismal number of COVID-19 cases, far fewer people will be out at bars and restaurants or going to Super Bowl parties. And with overall viewership of the NFL declining -- down about 8% for the full season -- it would be easy to assume the Big Game may just be one more disappointment for the staggering industry.

Except. We have reigning champ Patrick Mahomes, the Kansas City Chiefs' beloved young superstar. Tom Brady, the reviled ancient warrior, now in Tampa Bay. The first time a host team has made it to the top. And besides, where the hell else are people going next Sunday night?

Let's start with the predictions. The National Retail Federation confirms that just 28% say they'll be throwing or attending a party -- the lowest in the survey's history. And those in the survey who are watching the game say they plan to spend $74.55 on average, the lowest in four years.

But more of them may turn to QSR and other restaurants to help set the table.

DoorDash, for example, is predicting a rush on to-go mozzarella sticks, boneless wings and chips and salsa, based on what football fans have been ordering throughout this strange COVID football season.

And expect a surge in desserts, since that's what fans ordered heavily during the last month's tense playoff games. (Its survey looked at trends from Sept. 13 to Jan. 10.)

And as they prepare to "homegate," DoorDash says 42% plan to order just before the game, 20% will wait for halftime, and 6% say they'll call after. And 93% plan to participate in some kind of virtual chat.

As always, brands are looking to get in on the game. Applebee’s is offering 40 free boneless wings on to-go orders of more than $40. And Buffalo Wild Wings, for example, is offering (for the third year in a row) free wings for America if the game goes into overtime.

QSRLand's money -- although odds currently favor Kansas City -- is on the restaurant business to make it through.

The NPD Group just released an encouraging analysis demonstrating that the industry is battling back despite the closures. It's clawed its way from a -35%  traffic decline in April to a -11% visit decrease in December (as compared to a year ago.) And despite ongoing mandatory dining-in restrictions, off-premises solutions "are the silver linings," writes NPD food industry advisor David Portalatin.

The Port Washington, New York-based market research company says digital restaurant orders, which had already been rising before the pandemic, rose 19% last January and 145% in December, compared to a year ago.

Carry-out gained 3% in January 2020 and 10% in December, compared to prior-year figures. Drive-thru, already one of America's most beloved ways to eat, was up 4% back last January, but up 22% in December, and now accounts for 44% share of off-premises orders. While gaining in the triple digits throughout the pandemic, delivery still accounts for just 11% of all off-premise orders.

"Digital orders for pick-up and all off-premises modes will be a growth engine for the U.S. restaurant industry moving forward," he writes. "Consumers, both new and former users, have now experienced the convenience of digital ordering, especially for carry-out and delivery, and will continue using these services long after the pandemic is over."

So while one team has to lose, we're betting restaurants will win. It's Game Day. America's hungry. And nothing tastes as good as a Super Bowl spread we didn't have to cook ourselves.