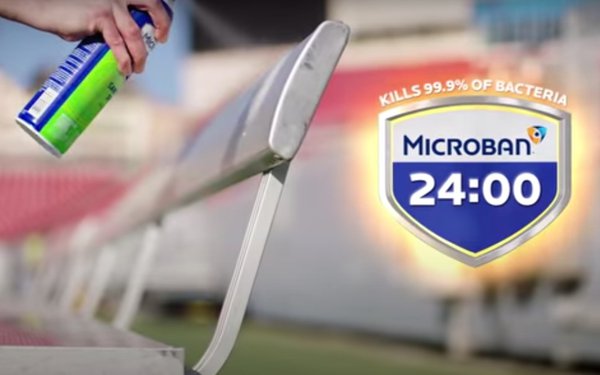 Procter & Gamble brands Microban 24 and Safeguard are using the Super Bowl this year to underscore their relevance in the pandemic era.

Just 25,000 fans will be allowed into the Raymond James Stadium in Tampa Bay for the Super Bowl this year. The staff that will be tending to them will receive small bottles of Safeguard hand sanitizers in PPE gift bags as a memento of their service and the times we’re living in.

By kickoff, the stadium will have gotten a big dose of P&G’s Microban 24 disinfectant, being applied to “key high-touch areas at the stadium including player locker rooms, the officials’ locker room, the media dark room, and the sideline benches for both team,” the brand announced.

Outside the stadium,  the NFL and host city each year put together a “Super Bowl Experience,” a kind of football-related theme park mainly for the throngs who can’t get into the game. This year, Safeguard will populate that area with nearly 1,000 hand-sanitizing stations.

“Practicing proper hand hygiene is one of the most important things you can do to help prevent the spread of germs for yourself and others. Using a hand sanitizer, like Safeguard, is an important step in the process, especially when soap and water are not easily available,” said Paul Edmondson, vice president. North America, for the P&G Professional division.

That branch took on a higher profile in the last year as P&G and other brands realized the impact branding could have on consumers who see a hotel, restaurant or other high-traffic place advertise it uses a certain brand’s products to guard against COVID-19.

Procter & Gamble introduced Microban 24 just before the pandemic took hold in the United States, and it instantly became a popular product. It’s formulated to kill germs for 24 hours when used properly, a unique niche in the disinfectant field.

For the Super Bowl, the brand enlisted Laurent Duvernay-Tardi, a guard on defending Super Bowl champion Kansas City Chiefs, to honor a member of the sanitation staff at Arrowhead Stadium, where the Chiefs play their home games. The so-called Most Valuable Protector will be the first in a series that will continue throughout the year, "through partnerships with active NFL players in other markets who will recognize essential sanitation workers in their home cities,” according to a brand spokesman.

Duvernay-Tard is a unique frontman for the brand, the first active NFL player who is also an doctor. He took off this season to work with COVID patients in his native Quebec, a decision so impressively selfless he was named Sports Illustrated's Sportperson of the Year in 2020.

Two other P&G cleaning products also get Super Bowl exposure the usual way, but with an unusual message. Swiffer and Dawn share an ad -- a novelty right there -- about sharing home cleaning tasks. The   “Come Clean to Close the Chore Gap,” campaign points out new P&G research that says in 65% of households, the responsibility for most chores still falls on one person.

This ad will run in the pre-game show but the even-steven message may hit the right crowd. The demographics for the big game are usually only slightly more male than female, meaning the crusade to more equitably divvy up chores could begin right then and there.

Or, you know, maybe right after the game.