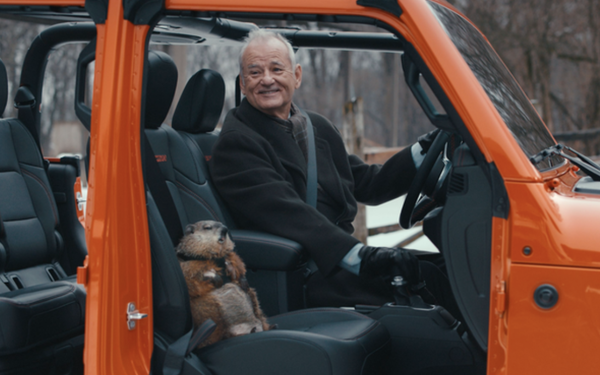 Stellantis’ Jeep brand will return to the Super Bowl this year with a spot in the second half.

That’s all the information that the automaker, formerly known as Fiat Chrysler Automobiles, communicated in a statement. There is no hint to which agency is creating it or if it will include a celebrity like last year’s popular Bill Murray/"Groundhog Day" spot, or a seat-belted groundhog, for that matter.

CMO Olivier Francois has a history of keeping Super Bowl creative close to the vest, preferring to go for the “surprise and delight” factor when the audience sees an ad for the first time in the context of the game.

Last year’s spot from HighDive in Chicago marked a return to the game after a hiatus in 2019 when the automaker ran its ads digitally only. It ran during the fourth quarter of Super Bowl LIV, in which the Kansas City Chiefs beat the San Francisco 49er by a score of 31-20.

It finished first in USA Today's Ad Meter, which ranks Super Bowl ads by consumer rating with voters giving each ad a score from 1 to 10.

The spot also was one of the finalists for a Creative Arts Emmy, losing to "Back-to-School Essentials” for client Sandy Hook Promise, created by BBDO New York.