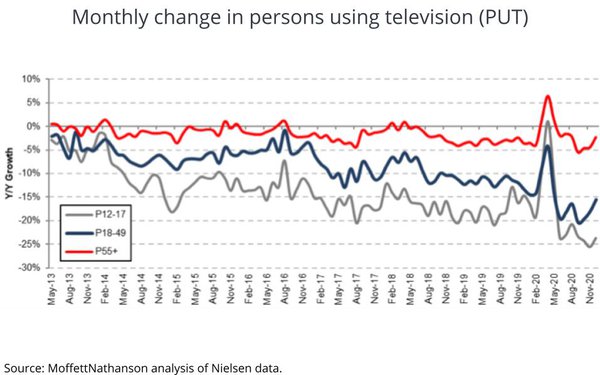 Despite a sharp spike in Nielsen-measured People Using TV (PUT) data at the start of the pandemic, overall levels declined by the end of 2020 -- especially among 18-49 viewers.

In December 2020, PUT levels fell 15% for 18-49 viewers, and were 25% lower for people ages 2 to 17. Only those 55 and older were relatively unchanged -- slipping just 2%, according to MoffettNathanson Research analysis of Nielsen data.

“As a result, linear TV ratings continue the shift to older and older viewers, with 65% of all cable network viewers now over the age of 50,” according to the report. “As more young people cut the cord or avoid traditional pay TV altogether, inevitably the share of television viewership by those 50 and older will just grow higher and higher.”

By comparison broadcast TV has stayed more stable over the years. In the fourth-quarter 2020, 67% of broadcast TV viewers were 50 and older; 27%, 18-49; and 5%, 2-17 -- looking at total day Nielsen C3 viewership, the average minute commercial ratings plus three days of time-shifted viewers.

Still, for 2020 overall, cable TV network time viewed by consumers got a slight 2% bump versus the year before -- to 5.4 trillion minutes, with the increase almost entirely from live TV news networks. This comes from an analysis of Nielsen data for persons 2 years of age and older, for average minute commercial ratings plus three days of time-shifted viewing.

Broadcast TV networks witnessed declines, mostly due to the lack of sports programming -- as well as program production delays for the late September start of the new season.