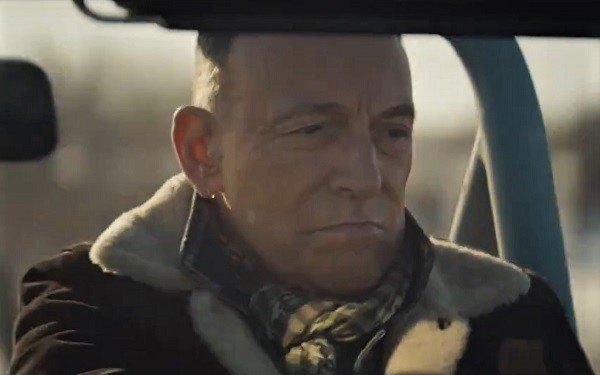 Is it too much to ask of one of our premiere rock stars that he lighten up when he comes to a Super Bowl party?

When the rock star is Bruce Springsteen, it apparently was too much to ask as he starred in a Super Bowl commercial in which he was seen driving a white Jeep alone somewhere out on the Great Plains (and definitely not in the swamps of Jersey) while his voice was heard sermonizing gloomily about fear and freedom in America's middle.

The takeaway: “Jeep: The Preferred Vehicle of Grumpy Old Men.” This sad, depressing Springsteen-Jeep spot was one of the worst commercials seen during the Super Bowl Sunday evening on CBS.

Very generally speaking, much of the messaging seen just before and during the big game seemed to represent a battle between light and dark, serious and comedic.

The view from here is: Comedy and light were the clear winners. Among the best of these were the “two-dimensional” Matthew McConaughey spot for Doritos 3-D (also featuring Mindy Kaling and Jimmy Kimmel) and the GM Ultium battery “Norway” spot starring Will Ferrell with support from Kenan Thompson and Awkwafina.

In fact, many of the best, lighthearted spots seen during the game featured appearances by multiple stars. These included the “Bud Light is missing” spot featuring cameos by Post Malone and Cedric the Entertainer; the Scotts Turf Builder spot with Martha Stewart, John Travolta, Carl Weathers and NASCAR racer Kyle Busch; and the Corona beer spot with Snoop Dogg and Bad Bunny.

The best of these may have been the incredible Uber Eats commercial that reunited Mike Myers and Dana Carvey for a revival of “Wayne’s World,” featuring a surprise appearance by Cardi B.

Speaking of surprises: The face of Jason Alexander starring in a Tide commercial was a rich experience, at least for “Seinfeld” fans.

The actor’s face was seen in various expressions on a teen-aged boy’s soiled sweatshirt while the song “Believe It Or Not’ (sung by Joey Scarbury as the theme for “The Greatest American Hero” TV show in 1981) was played in the background.

Alexander himself finally appeared near the end of the spot, obviously playing his George Costanza character from “Seinfeld,” although this was never specified.

The song too had a role in a “Seinfeld” episode: George used his own personal version of it as his outgoing message on his phone answering machine (“Believe it or not, George isn't at home … Leave a message at the beep!”).

In the comedy category, a very honorable mention goes to the Sam Adams beer spot in which a team of Clydesdales is accidentally set free and wreaks havoc -- a takeoff on decades of stately Budweiser spots featuring the iconic workhorses.

Celebrities, of course, do not always guarantee success for a Super Bowl commercial. For example, the commercial in which Ashton Kutcher sought to learn whether wife Mila Kunis was stealing his Cheetos defied belief because there is no way svelte Mila Kunis gorges herself on low-rent junk food like this.

These used a diverse array of company personalities to illustrate the service's “mountain of entertainment” symbolized by the famed “mountain” Paramount logo.

CBS also gave ample promotional attention to two upcoming prime-time dramas -- “The Equalizer” starring Queen Latifah that was scheduled to premiere after the Super Bowl, and “Clarice,” the “Silence of the Lambs” spinoff premiering this Thursday.

The “Clarice” spots illustrated another trend in pop culture recently -- namely, the sad, slow, newly recorded version of an older, familiar song that was not sad, nor particularly slow, in its original incarnation.

Since the character of Clarice Starling is from West Virginia, a new dreary version of the old John Denver song “Take Me Home, Country Roads” was heard in the “Clarice” promos, which were almost as depressing as listening to Bruce Springsteen mutter about America.

This trend was also evident elsewhere during the Super Bowl, most notably in the rendition of “America the Beautiful” offered before the game by the recording artist known as H.E.R., who seemed to have no idea what she was singing.

Her somber delivery simply did not jibe with this classic song’s celebratory message of America’s epic grandeur and the heroes who have helped preserve and safeguard American freedom.

For that matter -- though many may disagree with this -- somber messages that are decidedly un-celebratory (or just plain unhappy) have no place at a Super Bowl, which is, after all, a football game, nothing more and nothing less.

And for those too young to have heard the happier, original versions of some of our most popular songs, please allow me to recommend Ray Charles’ version of “America the Beautiful” and John Denver’s version of “Country Roads.”

Speaking of country roads, the lonely meanderings of Bruce Springsteen in a forlorn jeep on the backstreets of America simply cannot compare to the happy version of “Country Roads” recorded by Toots and the Maytals, in which Jamaica was substituted for West Virginia.

Perhaps Bruce Springsteen should listen to more reggae. It just might cheer him up.