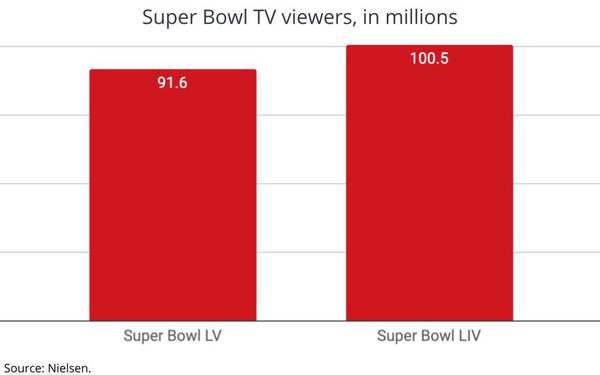 A mostly lopsided “Super Bowl LV” game witnessed a sharp decline of 9% on CBS to a Nielsen-measured 91.6 million viewers -- the lowest viewing for the game since 2006.

A year ago, Fox aired the game between the San Francisco 49ers and Kansas City Chiefs and earned 100.5 million viewers.

Although traditional TV viewing was down, CBS says it gained streaming viewers -- soaring 65% to 5.7 million viewers in average minute Nielsen-measured viewers over 2019.

Fox was at 3.4 million streaming viewers last year, according to the network.

The total audience for the big game -- for CBS TV networks and all its related streaming platforms -- was 96.4 million, down 6% from Fox's total audience a year ago, at 102.1 million. Total audience results came from CBS and Fox, respectively.

The decline was largely due to the lopsided 31-9 win by the Tampa Bay Buccaneers over the Kansas City Chiefs.

This year’s game was the lowest viewership for the Super Bowl since 2006 -- when ABC earned 90.8 million viewers for that game between the Pittsburgh Steelers and the Seattle Seahawks.

Although linear TV viewing numbers were softer than a year ago, CBS says the Super Bowl became the first NFL game in history to produce 1 billion total streaming minutes.

This year, Nielsen says 68% of U.S. homes with televisions in use were tuned to the “Super Bowl LV” game.