Industry experts’ takes on the future of virtual multichannel video programming distributors, aka vMVPDs, may be even more divergent than assessments of new SVODs like HBO Max.

Perhaps that’s because these platforms have had a rollercoaster-like history.

Last month, I put forth Parks Associates’ view that vMVPDs could now be positioned to become the dominant successor to traditional pay TV — “if they can avoid the pitfalls that typically drive pay-TV customer dissatisfaction, such as rising prices and inflexible content and platform options.”

But some leading analysts take the opposite view.

LightShed Partners media and technology analyst Richard Greenfield, for instance, recently wrote that mMVPDs are “looking more like their predecessors, albeit with better interfaces/features, less RSNs [regional sports networks] and the ability for consumers to cancel (churn) at any time.”

“Unless there is an ulterior motive to your vMVPD ambitions (such as YouTube TV’s goal of bringing more ad buyers into the YouTube ecosystem or Hulu Live’s goal of inflating ESPN’s subscriber base), it is increasingly clear that a standalone vMVPD is simply a bad business,” he declared.

Antenna — a year-old firm that provides market measurement of purchase behavior and subscription metrics to enable data-driven insights for companies in entertainment and other industries — isn’t  in the business of taking sides or making bets on platforms.

Instead, Antenna Co-Founder and Chairman Jonathan Carson provided charts showing trends in some of vMVPDs’ key business parameters, along with some overall observations.

“vMVPDs have emerged as a fascinating new alternative for consumer households looking to move away from their traditional pay-TV contracts,” he says. “Over the years, the vMVPD market has been highly unstable, with significant ups and downs in sign-up numbers, higher churn than traditional pay TV, and big changes in market share among the players.”

“The future of vMVPDs is largely dependent on the choices that the big media companies make with their programming —meaning the degree to which they continue to support traditional linear networks, especially in respect to live sports,” he adds.

“Like SVODs, vMVPDs succeed by acquiring subscribers, mitigating churn, and winning back subscribers who cancel. With the exception of Philo, which has no live sports, we’ve found that key sports moments — like the NFL season start — drive the bulk of vMVPD subscriptions. As sports slowly but surely continue to become available on SVODs at far cheaper price points than in pay-TV bundles (such as the NFL on Amazon Prime Video, Peacock and CBS All Access), it may become more challenging for vMVPDs to acquire those ‘sports subscribers.' The availability of sports content and resulting acquisiton/retention behavior is one of the key trends we’ll be keeping a keen eye on.”

Here are six charts that shed light on vMVPDs’ ups and downs over the course of 2020, with observations mostly from yours truly: 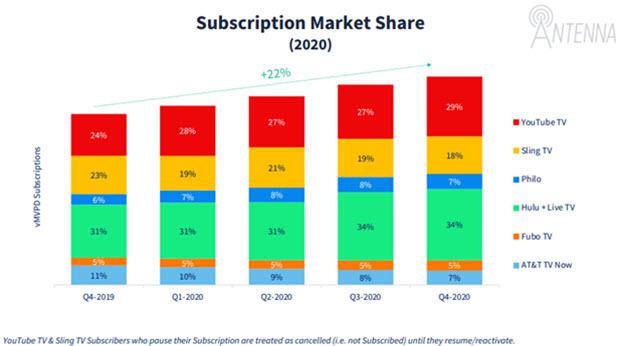 The vMVPD segment as a whole saw healthy 22% growth in subscriptions between Q4 2019 and Q4 2020, with a third of that growth coming in Q3 — when live sports began to return.

As you can see, Hulu + Live TV began the year with a nearly one-third share, and increased that advantage by 3 percentage points by Q4 2020. Second-place YouTube TV gained 5 percentage points of share over the period, to reach a 29% share. Sling TV’s performance was the most erratic, likely reflecting its series of aggressive promotions over the year. Fubo TV kept a steady 5% share, while AT&T TV Now lost 4 percentage points, ending with a 7% share. 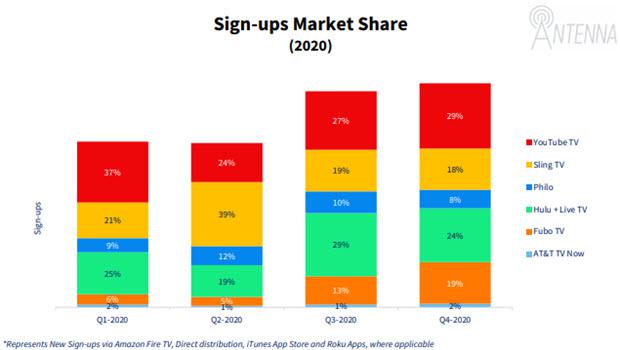 Not surprisingly, consumers who use vMVPDs are highly receptive to promotional pricing, and shares of new sign-ups tend to closely reflect price promotions, price increases and programming changes.

For instance, Sling’s “Stay in & Sling!” promotion — which, in a twist on sampling, offered free access to some news and entertainment content without an account as the pandemic lockdown kicked in in March — drew fully 52% of vMVPD sign-ups during April, boosting its quarterly share of sign-ups to 39%.

On the other hand, price reactions don’t necessarily last very long. As we reported during the summer, YouTube TV hiked its price by $15, to $65, at the end of June. But this chart shows it still managed to increase its share of sign-ups by 3 percentage points in Q3. (Perhaps the addition of ViacomCBS channels helped?) Note: Hulu + Live TV also upped its price to $65, as of Dec. 18. 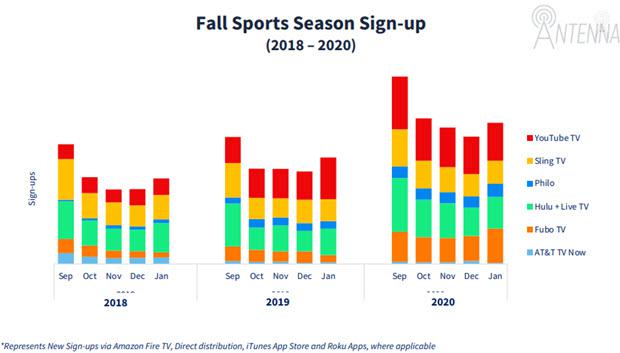 With pandemic-driven streaming consumption increases in play and the resumption of some pro sports, the September to December 2020 period saw a 45% lift in vMVPDs’ total sign-ups compared to the same period in 2019. 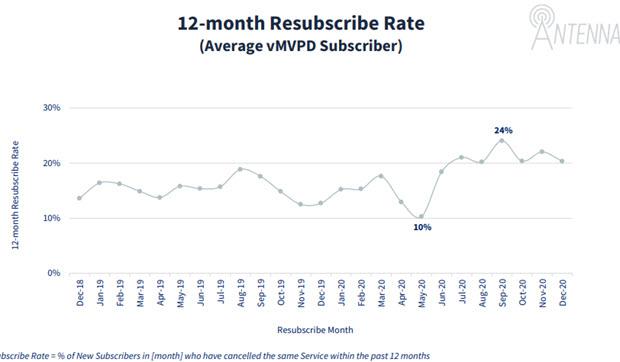 This metric merges resubscribe data from all vMVPDs to show overall patterns. Overall resubscribe rates dropped to a low of 10% at the onset of the COVID-19 lockdown, but rebounded to a high of 24% when the NFL season began in September. 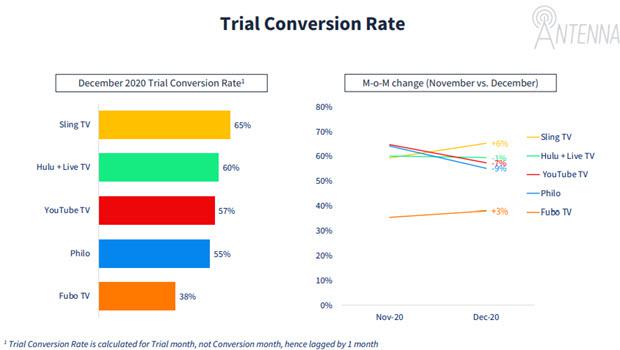 As with SVODs, vMVPDs offer free trial periods. Between November and December last year, Sling TV was the outstanding performer, with a 6% gain in its paid conversion rate, to 65%. Hulu + Live TV wasn’t far behind, at 60%, but its conversion rate was essentially flat. Fubo TV improved a bit, but still came in last, at 38%. YouTube TV and Philo both saw declines in conversion rates. 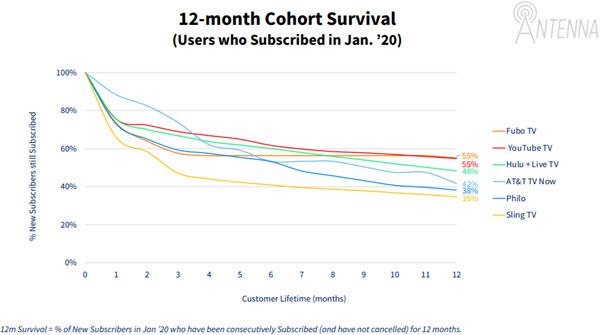 Here’s a look at what percentages of those who subscribed in January 2020 were still subscribers a year later.

What about churn rates? Suffice it to say that like SVODs, vMVPDs are quite subject to spikes in churn after price increases — particularly since, unlike many pay-TV providers, these alternative platforms make it easy and pretty much cost-free to switch their services off and on.

Harking back to the importance of sports, some vMVPD users switch on a service at the start of the NFL season, and switch it off after the Super Bowl.