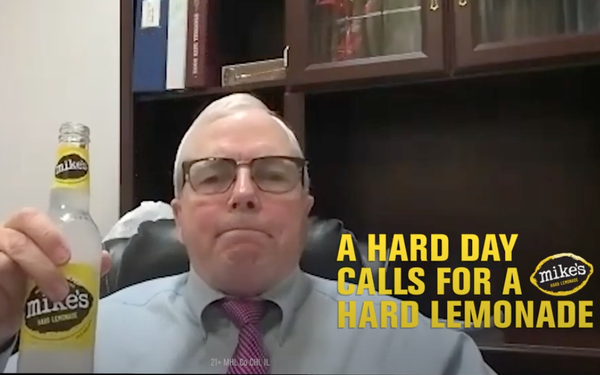 Mike’s Hard Lemonade knows a viral sensation when it sees one, and has enlisted Rod Ponton, best known as the “I’m not a cat” lawyer, for a social effort.

The Texas attorney continues to experience his 15 minutes of fame after a video of him struggling to turn off a hilarious kitten filter during a Zoom hearing with a judge and other lawyers went viral last week.

In its first work for Mike’s Hard Lemonade, WIP incorporated “unreleased footage” from the original viral video, which has more than 7.6 million views on one news site alone, to illustrate how “a hard day calls for a hard lemonade.”

“I’m here live—I’m not a cat,” he nervously assures the assembled masses at one point, a statement that sounds even funnier when it’s mouthed by a googly-eyed kitten. He offers to proceed with the meeting while using the avatar as his assistant troubleshoots the issue.

In Mike’s 17-second video, the camera cuts from the kitty to Ponton sitting at his desk as he cracks open a bottle of Mike’s Hard Lemonade. “Rod was clearly having a hard day and Mike’s Hard Lemonade wanted to be there to brighten it,” said Matt Talbot, CCO of WIP.

Mike’s video featuring the cat lawyer has already received more than 2,800 reactions on Facebook and has been shared more than 640 times. It also has been viewed more than 1,000 times on Twitter.

“By building on this fun cultural moment, we’re driving brand awareness and relevance, and hopefully adding a little fun to people’s lives,” Shea tells Marketing Daily. “Like millions of people, we laughed at the ‘Cat Lawyer’ video, so we reached out to Rod Ponton and offered him a Mike’s because a hard day deserves a hard lemonade. He agreed and was a great sport.”

Mike’s is a brand with a fun-loving spirit, he adds.

“Like most of us, our core consumer is looking for a break from the routine and wants easy ways to make life more colorful,” Shea says.

Mike’s Hard Lemonade is a flavored malt beverage founded in 1999 that became part of Mark Anthony Brands in 2017. The company recently introduced a hard lemonade seltzer in four flavors.