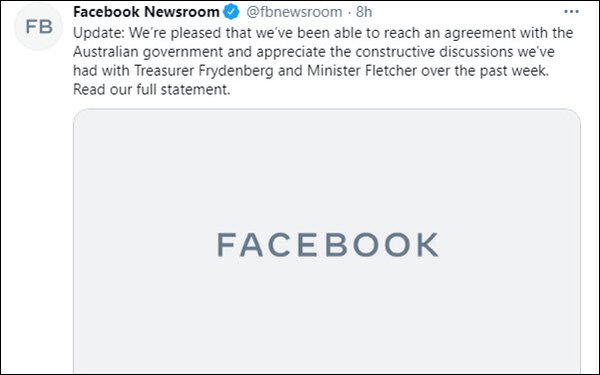 Facebook is restoring news to its platform in Australia, and has already reached a deal with one major media company, after the government agreed on Tuesday to last-minute changes to a proposed media content payments code.

The amendments give platforms more room and motivation to negotiate agreements with media so as to avoid having the government force payments mediation.

“Facebook has refriended Australia,” government Treasurer Josh Frydenberg declared on Tuesday. “Australian news will be restored to the Facebook platform, and Facebook has committed to entering into good-faith negotiations with Australian news media businesses and seeking to reach agreements to pay for content.”

Broadcast network owner Seven West Media, which earlier this month signed a content payment agreement with Google, announced Tuesday that it has now signed a letter of intent to provide news to Facebook.

Facebook shut off news in Australia last week after the country’s house of representatives passed the law, which will require social media companies to negotiate payments to media for using their content.

After negotiations between government officials and Facebook CEO Mark Zuckerberg, the law, which is expected to pass as early as Wednesday, will now take into account whether a specific digital platform has already made commercial deals with local news media companies before determining if the code should be applied formally to that platform.

The government also agreed to add two more months to a three-month mediation period to allow platforms and publishers to broker deals before they are forced to enter arbitration as a last resort, and to give platforms a month’s notice before reaching a final decision.

If arbitration kicks in, government-appointed arbitrators would still make a ruling, choosing one party over the other and determining a final price, with no room for middle ground, according to TheSydney Morning Herald.

The code’s non-differentiation provisions, “which could see the tech giants fined as much as $10 million for punishing news businesses that participate in the code, will also be clarified to ensure they are not triggered as a result of the publishers securing different types of deals or remuneration,” the Herald reports.

Facebook, which has been adamantly opposed to specifics of the arbitration clause, feels that the changes “will allow us to support the publishers we choose, including small and local publishers,” Campbell Brown, Facebook vice president, global partnerships, stated in a blog post.

“Going forward, the government has clarified we will retain the ability to decide if news appears on Facebook so that we won’t automatically be subject to a forced negotiation,” Brown wrote. Facebook will “continue to invest in news globally and resist efforts by media conglomerates to advance regulatory frameworks that do not take account of the true value exchange between publishers and platforms like Facebook,” he added.

The changes will serve to clarify how the bargaining code will be implemented and “add further impetus for parties to engage in commercial negotiations” to avoid triggering application of the code, the government said.