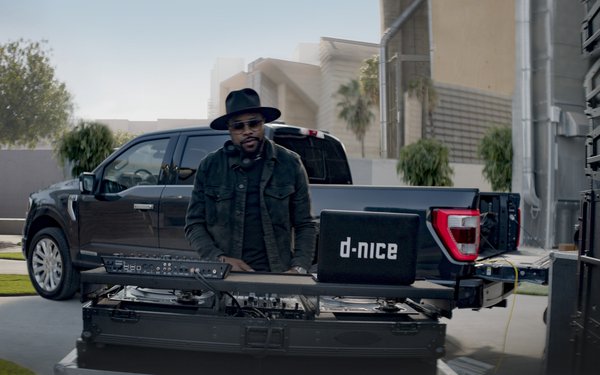 Ford Motor Co. knows that statistics matter. The automaker is targeting a diverse audience for its popular and profit-leading F-150 pickup truck.

Efforts include specific creative geared toward Hispanics and Blacks. Ford has multicultural marketing communications managers for each segment. Dibrie Guerrero talked to Marketing Daily's Top of The News about efforts focusing on Black audiences, while Dave Rodriguez discussed Hispanic-oriented efforts.

“I think we do have an ever-evolving and improving diversity inclusion type of perspective. Hispanic and African-American are super important, as are the other groups," Rodriguez says.  "Ultimately, we make business decisions based on volume opportunities and where we think we can have the most impact.”

In 2020, non-Hispanic white people are still the majority race in the U.S., representing 59.7% of the U.S. population, per demographer Dudley L. Poston, Jr., a professor at Texas A&M University. By 2030, whites will have dropped to 55.8% of the population, and Hispanics will have grown to 21.1%. The percentage of Black and Asian Americans will also grow significantly. Eventually, whites will become a minority, dropping below 50% of the U.S. population around the year 2045, according to Poston.

Rodriguez says significant business development actions to drive customer engagement have been accomplished in Latina/Latino marketing, community outreach and in major sports (boxing, soccer/futbol) partnerships. Zubi has been Ford’s Hispanic AOR for many years, he says.

The Zubi/Ford team embarked on a research project last year to determine exactly how Hispanics are being affected by the COVID-19 pandemic and provide foundational learning to guide marketing communications, including confirming insights aligned to the 2021 F-150 campaign approach, Rodriguez says.

“Among the more touching things we observed was how Hispanics overwhelmingly expressed concern for others who they see as less fortunate than themselves, at a moment where one could be forgiven for being more selfish and self-absorbed,” he says. “Surprisingly, this concern for one’s fellow men and women was especially true among the less acculturated respondents, who had lower household incomes.”

A 30-second spot, “Grandeza,” from Zubi, which began airing in January and runs through the second quarter, shows how the truck can be used for work, family and volunteering. With music from the “iconic Tex-Mex band Los Lobos” as a backdrop, it’s basically a “day in the life” spot for a truck owner, Rodriguez says.

The ad is part of an effort that includes Spanish-language media channels and social outlets.

“With everything going on with the pandemic and being sensitive to what the African-American community is going through … how do you turn [F-150 marketing] into something that is relatable?” she says. “We wanted something that was uplifting, kind of like a light at the end of the tunnel.”

Last March, with the live entertainment industry shut down,  DJ D-Nice created the Instagram Live series “Club Quarantine.” This inventive response to the pandemic opened up a virtual space for hundreds of thousands of people to unite as D-Nice spun musical hits for hours on end.

Ford and D-Nice are teaming up in a multicultural lifestyle campaign called “More Than Tough” from Ford’s African-American AOR, Uniworld.

A 30-second spot themed “Work It Out” began airing in January. It features D-Nice driving to a gig in a 2021 F-150, bringing  the party to the people by using F-150’s Pro Power Onboard to run his equipment. A 60-second spot shows the F-150 being used by D-Nice and others.

“Being a brand that is very much about diversity and inclusion, we want to make sure that we still celebrate the uniqueness of our audience,” Guerrero says. “Perseverance, passion and persistence are the virtues that drive the African-American community. They expect their truck to show the things that they believe in the power of.”

The effort with D-NIce includes digital and social activations and can be heard on select iHeart podcasts. Social extensions bring to life stories showcasing a male artist and female caterer who use their F-150 trucks to come together with D-Nice to celebrate a momentous occasion with the hip-hop classic “Call Me D-Nice” serving as the soundtrack.

Last year was a “paradigm shift” in the U.S. in terms of how we think about different cohorts in this country -- one that automakers will not be able to escape, since consumers are more savvy than ever in expecting authenticity in their marketing, says Mario Carrasco, co-founder and principal of ThinkNow, a technology-driven cultural insights agency.

“Automobiles are a personal purchase, and one of the most consequential in many people’s lives," he says. “Looking at trucks in particular, they are reflective of cultural values. Appealing to diverse audiences will require understanding these values.”

U.S. Hispanics over-index in truck purchases in relation to all other cohorts in the U.S. One explanation is the higher likelihood of U.S. Hispanics having jobs that require a truck, but that is only part of the story, he says.

“Many people with trucks dread the ‘Hey, what are you up to this weekend?’ phone call from their friend who's moving,” Carrasco says. “However, in our research with one of the top automobile manufacturers in the U.S., we discovered that for U.S. Hispanics, that call is not only welcome, [but] they purchase trucks to be the go-to person of the family or friend group when people need a hand with something. This points to a cultural value that is linked to Hispanic culture: collectivism.”

Automobile manufacturers that want to reach more diverse audiences will have to invest in working with vendors that understand how to cull these cultural insights if they want to be relevant in an increasingly multicultural world -- and what is slated to be a cultural awakening in 2021, he adds.