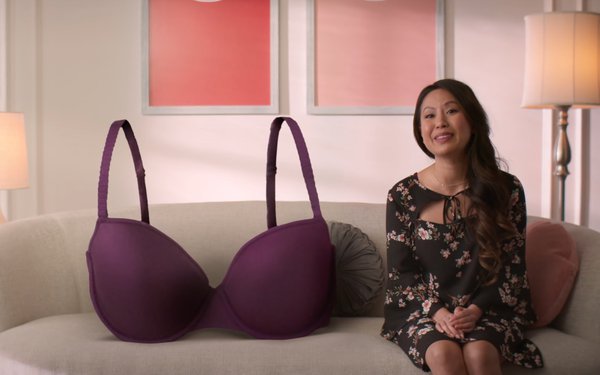 ThirdLove, already a favorite among women desperate for a better-fitting bra, has decided it's time for someone in the intimates category to have a sense of humor. Its new spot stars Dr. Bar'Bra Boulders, a fictional relationship coach who helps women break up with the losers and move on to bras that fit right -- and don't torment them.

D2C FYI checks in with Heidi Zak, the San Francisco-based company's co-founder and CEO, for more on the campaign, as well as its product expansion and next-generation customer experience.

D2C FYI: What made you decide to go the humorous route for the new "Your Boobs Deserve ThirdLove" campaign?

Zak: We started working on it in October of last year. Given everything going on in the world, it seemed like people could use a laugh. There is a lot of humor involved in buying a bra -- and no one in the category does it. So we felt we could go after it in a big way.

D2C FYI: The Harmon Brothers created it. Want to tell us how that came about?

Zak: It came out of a working session with minimal direction. They use multiple writers, and this is the one we landed on. She started as a therapist and then evolved into this life coach type.

D2C FYI: Obviously, you hope it increases sales. What other metrics matter most to you with an effort like this?

D2C FYI: Could you describe what sales have been like in the past year? Women's reluctance to wear bras has been one of the most endurable memes of the pandemic. How has that affected ThirdLove?

Zak: Intimates, as a category, have grown during the pandemic. And for sure, there's been a shift away from wired bras into wireless underwear and loungewear. But the category is still growing. Interestingly, there's also been an increase in sexy lingerie. So you have these two ends of the spectrum -- the sexy and the comfy.

That's been reflected in our business, with wireless bras and underwear growing as a percentage of sales. But that said, our best-selling item continues to be our wired t-shirt bra. Women say things like, "It's so comfortable I forget I'm wearing it," so in that sense, it fits into the "comfortable" trend.

Zak: I love the video and photography we're using. It's so real, and makes me happy every time we see it. The whole shoot was remote, so we hired photographers -- and their partners were our models, shooting in their homes. So we got to see them wearing the new line to get the mail and walk the dog.

It perfectly captures the nuance of what we were trying to do with our loungewear, which is making sure it's cute enough that you could wear it on a Zoom call, but comfy enough that you can sleep in it.

D2C FYI: You are selling them as "kits." What does that mean?

Zak: Yes. Over the past year, we've seen more and more women buying not just one fashion underwear with a fashion bra, but two. So kits just make it easier to order a set, and since the lounge collection is mix n' match, it makes it easier for her to do what she wants to do. We've seen tremendous success with them. And while we expected them to do well with repeat customers, and they are, we're seeing a really good response from first-time customers, too.

D2C FYI: You've also updated the fitting process with a new Fitting Room concept on the site. Why?

Zak: Our fit finder, which now includes 18 million women, originally launched in 2016. So it was time for an update. This is a big change, incorporating what we have learned from our customers. We're now addressing life stages and changes. Did you just have a baby? Gain or lose weight?

By getting women to refit themselves, we can do better for repeat visitors. And our assortment has changed dramatically over the past few years, so there's more choice in terms of style and colors. It also uses 3D animation, which is dynamic and helps [the customer] understand her own body and spirit.