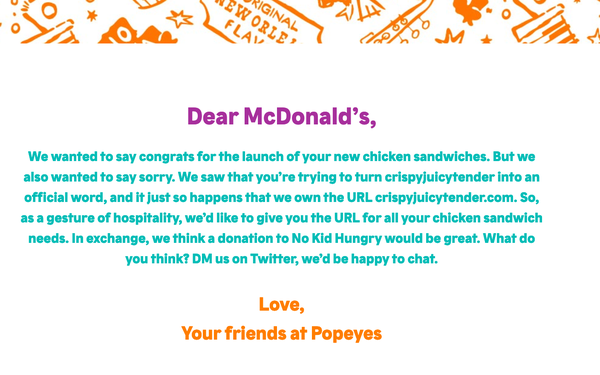 Now the QSR “wars” have resumed—at least in the chicken sandwich space.

The latest salvo is Popeyes trying to ransom—for lack of a better word—a URL whose wording replicates how McDonald’s is describing its new chicken sandwich.

By way of background, the Popeyes chicken sandwich launch in the summer of 2019 was a smash hit. Thus began the “chicken sandwich wars” among QSRs that already had such a menu item or were planning to introduce one.

In the original launch video, and two seconds into a video introducing a further iteration -- Spicy Crispy Chicken Sandwich -- McDonald’s describes the new menu item as “crispy, juicy and tender.”

Apparently, McDonald’s did not anticipate the ferocity with which the battles had resumed.

In advance of the McDonald’s Spicy launch, Popeyes says it had purchased 50 URLs “closely resembling” a McDonald’s website where people could get early access to its sandwich.

Among the URLs that Popeye’s had acquired was crispyjuicytender.com.

Anyone who clicks on that particular URL sees a message from Popeyes that begins “Dear McDonald’s. We wanted to say congrats for the launch of your new chicken sandwiches. But we also wanted to say sorry.”

Popeyes goes on to make a “gesture of hospitality” by way of offering McDonald’s the URL—provided the Golden Arches makes a donation to the charitable organization No Kid Hungry.

Midday on Monday, Marketing Daily asked Popeyes whether McDonald’s had responded to the offer.

“Unfortunately, no response from McDonald’s” was the answer.

McDonald's did not respond to a Marketing Daily query, either.

According to data from Edison Trends, online spending on chicken sandwiches across all restaurants it analyzed recently increased 420% between January of 2019 and December of 2020.

Popeyes “briefly took the lead from Chick-fil-A in market share of chicken sandwich online spend in January 2020,” according to Edison.