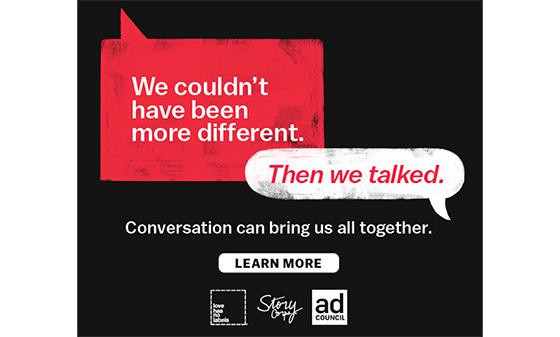 The Ad Council is launching its next iteration of “Love Has No Labels” to encourage political unity by encouraging strangers to get to know each other.

Developed in collaboration with creative agency Wordsworth+Booth and StoryCorps, the creative features animated videos of real people who have participated in One Small Step, the program first piloted by StoryCorps in 2018 to bring together opposing political views.

All messaging drives audiences to lovehasnolabels.com/onesmallstep for additional resources and the chance to sign up for the One Small Step program.

The campaign’s media strategy is designed to reach both sides of the political aisle. With StoryCorps grounded in audio storytelling, the effort features radio assets to inspire so-called “meaningful conversations,” like those in One Small Step. The multiplatform campaign also includes digital out-of-home and banners.

“Talking (and listening) to one another has never been more important” says Tony Mennuto, president, Wordsmith+Booth. “We are thrilled to help spread that message and inspire countless Americans to listen to the eye-opening One Small Step conversations and take the next step of having their own.”

Other brand partners for the initiative include Bank of America, Google/YouTube, Johnson & Johnson, State Farm and Walmart.