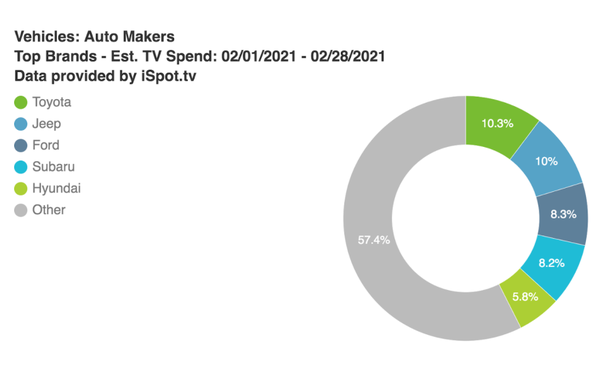 Despite some large Super Bowl buys, automakers spent 4.7% less on TV in February compared to a year ago, while TV ad impressions declined 9.1%, per iSpot.tv.

There was one fewer day in February this year, since last year was a Leap Year.

Toyota, which had a poignant Super Bowl spot featuring a Paralympic athlete. came out on top both in spending ($39.9 million) and TV ad impressions (2.7 billion).

Despite fewer auto brands advertising during this year’s Super Bowl, the game still made up the largest percentage of industry spend for the month -- 14.0% of the total for autos in February 2021, per iSpot.

“Even with fewer auto advertisers airing Super Bowl spots, these brands were largely still able to keep up the pace by finding audiences wherever they’ve dispersed to,” says Stu Schwartzapfel, senior vice president, media partnerships at iSpot.tv i

As streaming continues to grow, automakers are primed both to continue national TV spots while also using the power of addressable to target specific audiences, he adds.

After the Super Bowl, college basketball games made up 6.4% of spend, followed by NBA games (3.6%) and NHL games (1.8%). "Saturday Night Live" (1.5%) was the only non-sports show in the top five. Sports-related programming made up over 17% of all auto brand TV ad impressions during the month.

According to data from iSpot’s Ace Metrix, the Chevrolet spot performed 6.8% better than the norm in terms of audience attention, and 10.7% higher by likeability.

Given the fact that fewer auto brands appeared during the Super Bowl, just 11 of the top 20 increased spend this February compared to last. General Motors spent $13.1 million as an overarching brand after not doing so last February, while Land Rover led the way among returning advertisers with a 129% increase year-over-year. Acura also leapt 114%, Nissan was up 103% and Jeep saw a 55% jump.