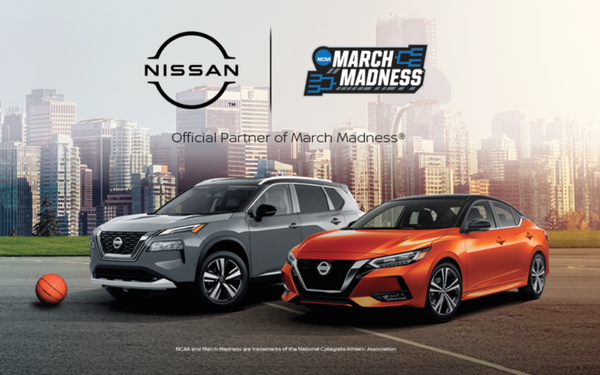 Nissan aims to engage fans through digital activations including an online bracket challenge during the NCCA Men’s Basketball Tournament.

The automaker, which is the official corporate partner of the tournament and Final Four, is showcasing the 2021 Sentra in a fast-paced 60-second spot, “The Chase,” created by TBWA’s Nissan United.

The spot highlights the popular compact sedan in hot pursuit of a runaway basketball bouncing its way through city streets and scenic byways en route to Indianapolis, site of the 2021 NCAA Men’s Basketball tournament.

Last year’s tournament was cancelled due to the COVID-19 pandemic and Nissan had to put its plans on hold, says Allyson Witherspoon, vice president and U.S. chief marketing officer, Nissan North America.

Consumers can participate in CBS Sports’ 2021 NCAA Bracket Challenge presented by Nissan for a chance to win a new 2021 Rogue and tickets to the 2022 Final Four. They can create their own bracket or take advantage of Nissan’s “Auto-Thrill” feature, where their bracket selections are auto-filled based on attributes of specific Nissan models, a 2021 Rogue, a 2021 Armada and 2021 GT-R.

Nissan will provide select fans an opportunity to participate in the Nissan Bracket Engineer – a virtual call with former professional basketball player and sports commentator Kenny “The Jet” Smith to get insights and tips toward making their picks.

Nissan will also be the presenting sponsor of March Madness 360 on CBS Sports Network, which will provide viewers with expert analysis each day during the tournament.

“With a limited number of spectators permitted to view the games in person, content from those on the ground will be all the more important,” Witherspoon says.”

Nissan is also co-sponsoring the March Madness Live on Android and the app’s “Fast Break”, which provides fans with live coverage during the first two rounds of the tournament including highlights, real-time analysis by industry stars, social reaction and commentary.