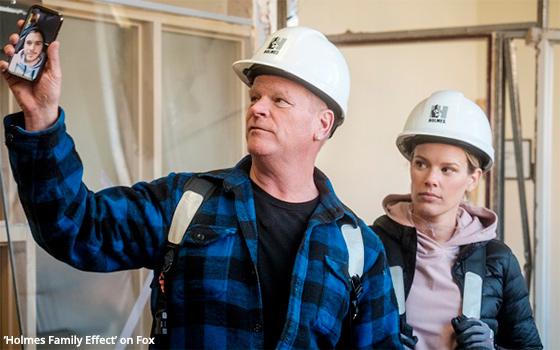 For a number of years now, TV companies have referred to the various networks and other content platforms they own as “brands.”

And we all know what they mean, too. Just like brands in any other realm of marketing and commerce, the names of TV networks mean something to the consumers who use them. Or at least they are supposed to.

But for some TV networks, maintaining a clear and easily understood brand identity can be challenging.

This week, the Fox network is serving as an example. On Monday night, the network debuted a revival of its old crime-fighting series “America’s Most Wanted.”

And on Tuesday night, two one-hour episodes of a renovation reality series from Canada will occupy Fox’s entire two hours of prime time. Two more episodes of the show will air a week later on Tuesday too.

While the “America’s Most Wanted” brand was long associated with Fox historically, this kind of show has not been a part of the Fox brand for about a decade.

In the intervening years, this type of reality-based law-and-order content has become the province of other networks, including A&E and Oxygen, to name two of them.

So when a person comes across “America’s Most Wanted” on Fox on a Monday night, the experience does not exactly scream “Fox.” This can create brand confusion, even if it is only momentary.

The same can be said about Fox’s two-week, Tuesday night plan to air four episodes (two on each Tuesday) of “The Holmes Effect,” which stars Canadian home renovator and construction expert Mike Holmes (pictured above).

Holmes first came to prominence on U.S. television some years back with a string of shows seen on HGTV, although those shows -- like this new one -- were originally produced and seen on Canadian television.

In the U.S., Holmes is best remembered for the HGTV shows he did whose central topic was the evil that home inspectors and other contractors do.

For homeowners, these shows (“Holmes Inspection” and “Holmes Makes It Right”) were harrowing to watch as Holmes would tour people’s homes and basically point out to the homes’ new residents how contractors and home inspectors had ripped them off.

The contractors did shoddy work that was not up to code. And the inspectors never seemed to see any of it. The shows would end happily, however, as Holmes and his crew would fix and rebuild the crummy work the other contractors left behind.

In “Holmes Family Effect,” Holmes and his grown son and daughter are seen generously helping organizations that are involved in worthy causes, but whose facilities are in need of investment and repair.

In the premiere on Tuesday night, Holmes directs the complete renovation of a trade school in a Toronto suburb. This is a show with a very big heart, and it is heart-tugging as well.

There is nothing at all wrong with “Holmes Family Effect,” which is recommended for one and all. But at the same time, I have to wonder whether viewers accustomed to watching Fox will come upon this renovation show and mistakenly think they have stumbled onto HGTV or some other DIY channel.

“Holmes Family Effect” simply does not look like a Fox show in any way, shape or form. It is off-brand -- at least to my eyes. Perhaps the powers-that-be at Fox feel differently.

The subject of instant brand recognition has occurred to me from time to time while watching some sports events on TV.

Most recently, I have made a mental note of two high-profile televised sports leagues that have become extremely flexible in the uniforms they are designing for their teams -- the NFL and the NBA.

This has been going on for a while. These leagues are costuming their teams in all manner of unusual patterns, colors and wording on their uniforms -- so much so that it is often difficult at first (and sometimes for a while) to determine what teams are playing when you happen upon a game in progress.

Once upon a time, recognizing teams from the consistent colors of their uniforms (either home or away) was second nature to sports fans. But not anymore.

I realize the leagues feel that they can spur sales of even more team apparel if they showcase a wider variety of designs on the basketball court or football field. But fans buy their favorite teams’ jerseys to be recognized by others for the teams they root for.

In addition, like TV networks whose brands should be obvious and instantly “readable” by anyone who encounters them, sports teams on TV should be too.