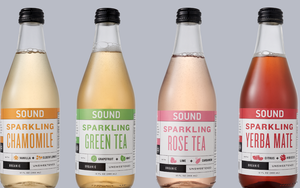 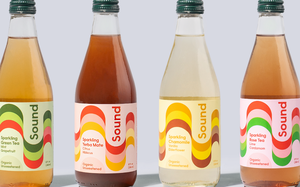 "Before" (top) and "after" packaging design.

Whoever thought dealing with the business impact of an infectious disease could be more complicated than working in a nuclear power plant?

The latter is what mechanical engineer Tommy Kelly was doing in 2012 when he came up with the idea for a sparkling tea beverage, which he launched in 2015.

Hence the launch of the Sound sparkling tea brand in 2015 by Kelly and co-founder Salim Najjar—who also worked at the Indian Point Energy Center in New York’s Hudson Valley.

Sound’s initial distribution in the food-service space leveraged the trend of companies providing “free-vend” beverages and food to employees—a trend that halted during the pandemic.

Hence the need for a rebrand, which Kelly discusses in this interview, edited for brevity and clarity.

CPG FYI: What led to the idea for a sparkling version of ready-to-drink tea?

Kelly: The inspiration came because I was a consumer of sparkling water and tea surrounded by soda drinkers. I wanted the proposition that soda offered—a crisp, cold, caffeinated beverage—but I didn’t want any of the junk in it.

CPG FYI: Were there other players in sparkling tea in 2015?

Kelly: Just a few brands, like Runa. Lipton had sparkling tea at the time, but tea was like the fourth or fifth ingredient. We were the first brand to launch an unsweetened sparkling tea where tea was the first ingredient after water.

CPG FYI: How did you manage to get into Whole Foods?

Kelly: At the time, they had someone named Elly Truesdell, whose position was as a local forager of new products. We got connected through a distributor. She loved our idea, thought it was unique and that it checked all the right boxes for Whole Foods.

CPG FYI: Tell us about your food-service business at corporate offices.

Kelly: We had friends who worked in offices with, say, 50 to 100 employees that gave them free beverages and food. So we started to pursue distributors that serviced those offices. We quickly started to realize that one of these offices would go through five, 10 and sometimes even 30 times more product a month than a single retail store.

CPG FYI: And then came the pandemic.

Kelly: That was sort of the segue into the rebrand. COVID-19 forced our hand as to why we had to shift gears. We needed to take a deeper look at just what the brand was and what our key identifiers would be as we continue to grow the business.

CPG FYI: One element of the rebrand includes QR codes. How are you leveraging those?

Kelly: QR codes allow us to seamlessly transition a customer from a physical to digital experience, where we can do more storytelling. Additionally, we can track geographically where cans are being scanned to see where the majority of our engaged customers are.

CPG FYI: What are the advantages of using podcasts to spread brand messaging?

Kelly: Even though the initial [ad] purchase of podcasts was a little bit higher than Facebook, the long-term value of the customer was greater. Because of the podcast, there is a level of credibility that comes with it. They’re more qualified, long-term customers.

Kelly: They generally give an overview on the brand—such as what it is and why it's different—and then offer listeners a discount code or some other call-to-action.

Using either a specific discount code or landing page, we are able to track how the customer discovered the brand. From there, we can run reports to see how many of customers repurchased.

CPG FYI: Besides a new website, what else are you doing in D2C?

Kelly:  We’ve been in direct-to-consumer, but we’ve never really invested as heavily in it as we did last year. It was 9% of our business in 2019, and about 45% of our business last year. The other piece of that is we’re starting to scale up more Amazon.

Kelly: Previously [on Amazon], it was third-party resellers who would get their hands on the product and be reselling it. Last year, we started to take more of the driver’s seat on it—taking over the listings and making sure we were managing the content along with paying for search keywords.