Google Stops More Than Half The Clicks 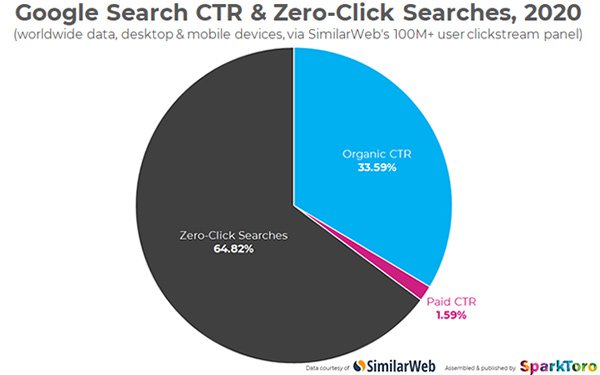 Some 64.82% of Google searches in 2020 ended without the searcher clicking through to a web site on mobile and desktop, up from 50% in June 2019, according to analysis published Monday.

“That number is likely undercounting some mobile and nearly all voice searches, and thus it’s probable that more than two-thirds of all Google searches are what I’ve been calling “zero-click searches,” wrote Rand Fishkin, CEO at SparkToro.

Fishkin wrote that on desktop, 46.5% of the searches did not result in a click, compared with 77.2% on mobile devices.

Searches that resulted in a click were much higher on desktop devices at 50.75% organic click-through rate vs. 2.78% paid CTR.

Fishkin acknowledges that the comparable 2019 data isn’t “apples to apples. In 2019 he used Jumpshot, with about one billion web browser searches from domestic desktop and Android devices. For this analysis he used SimilarWeb data, from about 5.1 trillion worldwide Google searches from 2020, and combined mobile and desktop devices, including iOS devices.

These searches took place on the more than 100 million panels of mobile and desktop devices from which SimilarWeb collects clickstream data. Of those 5.1 trillion searches, 33.59% resulted in clicks on organic search results.

Some 1.59% resulted in clicks on paid-search results. The remaining 64.82% completed a search without a direct, follow-up click to another web property.

Searches that end on the search engine and do not produce a click to a web property gives Google the value and not the brand or company. This can be troublesome considering Google sources much of the content that serves up on its results pages from publishers. An increase in this behavior can cost publishers millions.

The trend over time is a bit bumpy, but here are some additional takeaways from Fishkin’s post: