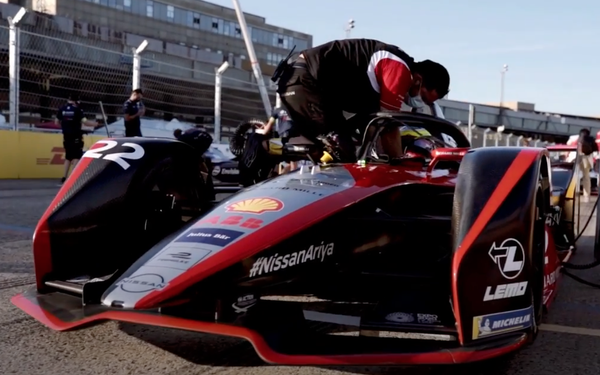 Nissan is joining the manufacturer lineup committed to the next generation of Formula E racing.

As part of its goal to achieve carbon neutrality across its operations and the life cycle of its products by 2050, Nissan intends to electrify all new Nissan vehicle offerings by the early 2030s.

Nissan is using Formula E to demonstrate the power and performance of its electric vehicles -- a key component of the Nissan Intelligent Mobility vision -- and to operate as a test bed for future electric vehicle technologies for consumers, according to the automaker.

The automaker created an online video announcing its commitment.

Nissan also used the Formula E race in Brooklyn in 2019 to connect with consumers in an experiential activation.

The first Japanese manufacturer to participate in Formula E and still the only one, Nissan joined other automakers sponsoring teams -- BMW, Audi, Jaguar. Mercedes-Benz and Porsche -- in Season 5, which ran from 2018-2019.

The automaker was last season’s runners-up in the team standings and is represented on track by Season 2 Formula E Champion Sébastien Buemi and 2020 Berlin E-Prix winner (Round 10) Oliver Rowland.

The Gen3 Formula E car is planned to be introduced for the ninth Formula E season (2022–23). The race cars will feature more powerful batteries which are also designed to handle “flash-charging,”allowing pitstop recharging into the championship for the first time.

Besides Nissan, McLaren, Mahindra and DS TeCheetah have signed on.