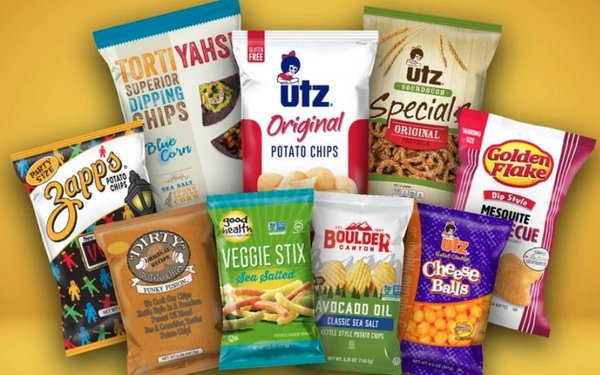 Over the last 100 years, privately held Utz Quality Foods has quietly but steadily grown to become what it says is now the country’s #3 salty snack manufacturer.

Having gone public last year in a deal involving the special purpose acquisition company (SPAC) Collier Creek Holdings, Utz has its eye on the #2 spot—held by Campbell Soup Co.—which would place it just behind PepsiCo/Frito-Lay.

Since launching Hanover potato chips in 1921, family-operated Utz has made many acquisitions. Among the most current  are its purchase of the Boulder Canyon brand in 2017 and Erin’s, Snyder of Berlin and other snacks from Conagra Brands in 2019.

In this interview, edited for brevity and clarity, Blubaugh talks about Utz’s more healthful offerings -- and why it will be shifting dollars from sports sponsorships to more accountable digital media.

CPG FYI: With Utz’s 100th anniversary approaching, how would you describe the company’s position in the market?

Blubaugh: A lot of our brands are still heavily skewed to still be very strong in certain regions. For instance, about 70% of Utz Brands sales are east of the Mississippi. We’ve expanded with national customers like Walmart, Costco and Sam’s Club—but the majority of our volume across our portfolio of potato chips, pretzels, cheese snacks and party mixes is still very much concentrated in the East.

CPG FYI: Like Frito-Lay and other competitors, Utz markets better-for-you snacks with brands like Boulder Canyon and Good Health. What are their strong suits?

Blubaugh: Boulder Canyon is kind of the shining star right now within our better-for-you portfolio. It’s a craft brand that uses ahead-of-trend ingredients like avocado oil. We have this nice tailwind in credentialing of oils and ingredients that’s creating permissibility and positive vibes in snacking.

CPG FYI: How about Good Health?

CPG FYI: Utz doesn’t use any television advertising and seems to be leaning more heavily into digital. Why is that?

Blubaugh: Our media plan is almost exclusively digital. We want to be on high-attention platforms versus necessarily high-reach platforms. We do expect to bring on radio in the back half of the year.

CPG FYI: You’re also shifting dollars from sports sponsorships like the one with Major League Baseball into other working media to better measure the results.

Blubaugh: One of the challenges with sponsorships is they tend to be expensive and multiyear. Also, what you get is logo placement unless you want to spend a lot more money. The ability to have targeted messages—as well as advanced targeting and hitting the households we want to hit versus who the sponsor’s hitting—was the [reason] behind that.

We'll be activating around the All-Star game this year. It’s not like we’re going to exit all sponsorships, but given that our portfolio is still fairly regional, it’s being able to hit those right audiences with a branded message versus just a logo.

CPG FYI: As a veteran of publicly held CPG companies, what has changed in your view now that Utz has gone public and its financials are out there for the world to see?

Blubaugh: No business is easy, whether you’re private or public. It’s just a different set of eyes on the business. It wasn’t like a huge shift for me, coming from a public company. It’s actually nice to have the investments because you get a lot of sets of eyes and a lot of smart people in the SPAC and the new board of directors.

There’s just a lot of really talented people who are asking questions, giving suggestions and helping you think about your business. I actually found that to be really valuable, in addition to, obviously, the money the SPAC invested to enable us to grow and continue our acquisition and expansion strategies.