Why GroupM's Wieser Is Feeling So Stimulated 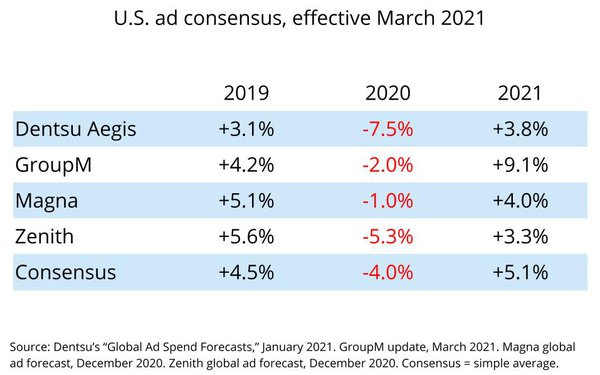 The U.S. advertising recovery is looking better and better with each new ad industry forecast update, but this weekend's revision by GroupM offers the most bullish adjustment to date, with total U.S. ad spending now projected to expand 9.1% this year, or nearly 15% after factoring out the effects of incremental political ad spending during 2020.

"Our upgrade of expectations is primarily a reflection of the healthier-than-expected recovery of the economy from the depths of the pandemic paired with the significant impact of fiscal stimulus the federal government is providing to consumers," GroupM Global Business Intelligence President explains in his update, adding, that while digital continues to be the "primary beneficiary of trends impacting the economy," overall economic conditions have "improved meaningfully" in the U.S.

Wieser is one of the most scientific of Madison Avenue's major ad forecasters, so his update should come as some relief for a beleaguered ad industry, as well as the media companies that depend on it for their revenue streams.

But his new numbers don't explain the rocky start to 2021, observed by the U.S. Ad Market Tracker, a collaboration of MediaPost and Standard Media Index, which so far shows the first two months of 2021 have begun on a down note -- contracting nearly 5% in January and more than 7% in February -- though both those months are comparisons with pre-pandemic level spending, and March will be most telling.

If Wieser's projections hold up, watch for a surge in the remaining 10 months of 2021, as the ad business puts the short-lived recession of 2020 behind it.