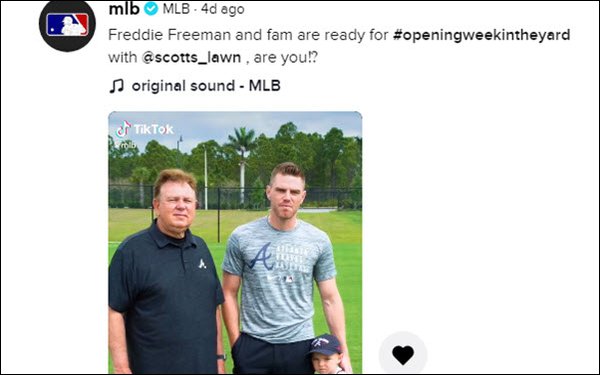 The Scotts lawn care brand is on board as the first sponsor of Major League Baseball’s new TikTok channel.

The channel is part of MLB’s efforts to draw younger fans/viewers, and Gen Z in particular. Scotts is also looking to grow the next generation of lawn care devotees, while retaining its own established fan base.

At 57, MLB’s average viewer age is among the oldest of all professional sports audiences, according to stats from Street & Smith’s Business Journal and Magna Global. (Golf, figure skating, horse racing, men’s tennis and NASCAR have older audiences.)

Scotts’ MLB TikTok sponsorship features Atlanta Braves star player Freddie Freeman and his son and a sweepstakes prompting fans to share their plans for “opening week in the yard, reports The Drum. The campaign (above) plays on a current TikTok meme, #TellMeWithoutTellingMe.

“We know that Scotts wants to reach a young audience,” Barbara McHugh, MLB senior vice president of marketing, said. “In that sense, it’s an organic opportunity to partner with us through the lens of baseball.”

Participating advertisers can use short-form video ad creative, which can generally be placed near relevant content.