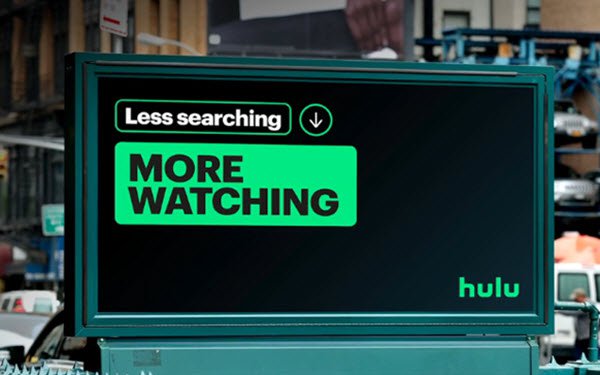 Hulu has launched a comprehensive new brand design and marketing campaign in a push to differentiate itself with consumers and advertisers amid the growing array of streaming service options.

A new cross-functional design system, dubbed “One Hulu,” aims to unify branding, marketing and product experience for the Disney-controlled service.

The mission of the cohesive branding and the ad campaign — which spans TV, online, social, outdoor and mobile — is to establish Hulu as the service that connects people with all of the content they love, and the starting place for their streaming experiences.

A TV ad (below) shows a man frustrated by trying to decide what to watch being advised by his companion to “Start With Hulu.”

Celebrities including Kris Jenner of “Keeping Up With the Kardashians,” actress Andra Day and L.A. Ram Aaron Donald are then featured in a montage highlighting the wide variety of content available through the service.

This creative will give way to a focus on Hulu’s original content this summer, followed by promotion of new fall content.

The brand redesign relies heavily on the bright green color already associated with Hulu, which was confirmed as a “source of power in brand cues” during the consumer research conducted for the redesign.

The research also indicated that consumers use symbols to navigate to things that “move them from stress to relaxation”; and that they expect Hulu to be “fun, modern, simple and straightforward.”

Shaping and conveying a unified brand message is the next challenge for Hulu, which was hamstrung for years by ownership shared among four giant entertainment companies.

Since Disney took full operational control of the streamer following its acquisition of 21st Century Fox in March 2019, Hulu has undergone an overhaul that has included integrations of other Disney properties and brands, including FX and Searchlight; a major ramp-up of its own original content; and a redesigned user interface.

As of February, Hulu reported having 39.4 million total subscribers, including 4 million to its livestreaming Hulu + Live TV bundle.

Hulu currently claims a 13% share of the market, ahead of much-newer streamers HBO Max and Disney+, and behind Netflix and Amazon Prime, according to Ampere Analysis.

Disney has said that building Hulu’s advertising is key in the strategy for Hulu and Hulu’s place within the company’s overall streaming plan. Hulu will be an important element in Disney’s upcoming upfront pitch.

Disney described the green frame around Hulu in the new brand design as a “’vessel” or “holder of precious things, to help elevate brand and content campaigns.”

As previously reported, in January and February, Hulu drew 873 ads, according to MediaRadar. Ad spend on Hulu tends to be concentrated in specific categories, such as media and entertainment and technology and retail, but February’s top 10 were fairly diverse: DraftKings, Samsung, Mercari Mobile App, Verizon, Kia, Taco Bell, T-Mobile, TurboTax, Hello Fresh and Geico.