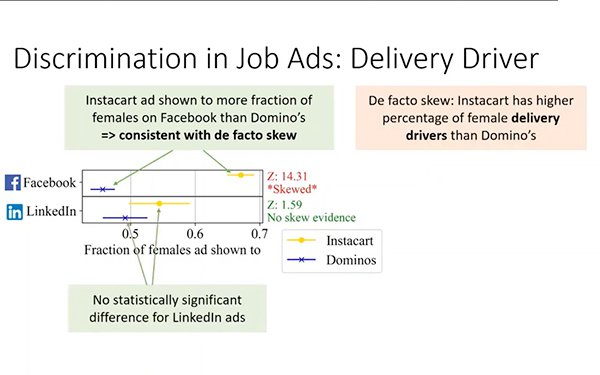 Researchers at the University of Southern California discovered Facebook’s ad servers discriminate against women by preventing them from seeing some ads that serve up on the platform for job. When they are served ads, they see different advertisements than men.

The study examined gender bias when serving ads for jobs based on the platform’s optimization choices and highlights how qualifications may be used as a legal defense against liability under applicable laws.

“Ad platforms such as Facebook and LinkedIn use an automated algorithm to deliver ads to a subset of the targeted audience,” explains the research paper. “Every time a member visits their site or app, the platforms run an ad auction among advertisers who are targeting that member. In addition to the advertiser’s chosen parameters, such as a bid or budget, the auction takes into account an ad relevance score, which is based on the ad’s predicted engagement level and value to the user.”

The USC research -- Auditing for Discrimination in Algorithms Delivering Job Ads, conducted on Facebook and LinkedIn -- found that one platform’s algorithms discriminate by gender, whereas no evidence was found on the other.

To discover this, the researchers developed a method for black-box auditing of algorithms for discrimination when delivering ads for jobs. They then developed an auditing method to distinguish between the differences in qualifications from other factors, such as the ad platform’s optimization for engagement or training its algorithms on biased data.

Researchers bought ads on Facebook to delivery ads for job listings that had similar qualification requirements but for different companies. The ads did not specify a specific demographic. One was an ad for Domino’s pizza delivery drivers, the other for Instacart drivers.

The researchers conducted a similar experiment on LinkedIn, where they found that the platform’s algorithm showed the Domino’s listing to as many women as it showed the Instacart ad.

It's clear that Facebook's algorithms take into account many attributes to target ads, but a Facebook spokesperson told The Verge, which first reported on the research, that it will take into consideration the issues raised in the report.