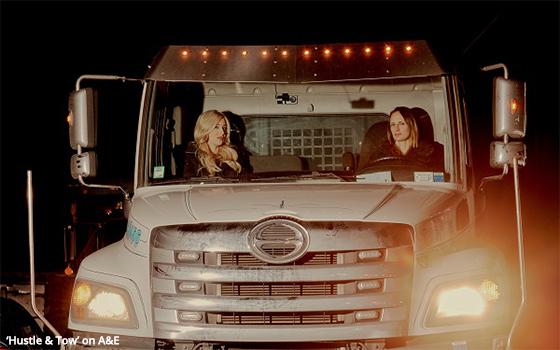 Tow-truck reality shows actually had a heyday early in the last decade with at least three that stuck around for a number of seasons, plus a handful of other shows that are less remembered.

The ones that were best-known were “Operation Repo,” “South Beach Tow” and “Lizard Lick Towing” -- the last of which showed the rest of us that some of our nation’s self-styled, fiercely independent towing companies are very creative when it comes to naming themselves.

This particular way with words is alive and well in “Hustle & Tow,” a new tow-truck reality series premiering on A&E Tuesday night. It is the first one to come along since around the middle of the last decade, which is when the others faded away.

In this fast-paced half-hour you will see at least three towing firms in action as they tow various vehicles both large and small resulting from highway mishaps or parking lot violations.

The latter is the bailiwick of an all-female firm in Delaware called Pink Hookers Towing (“hooker” being a word that many in the towing industry use to refer to themselves and their profession).

As seen in the premiere episode of “Hustle & Tow,” Pink Hookers has a contract with an apartment complex to police its private, residential parking lot for cars that do not have the correct parking permit, represented by a sticker in a front or rear window.

When these Pink Hookers come upon a stickerless vehicle, the car is quickly hung up on the tow truck and whisked away to an impound facility.

Not surprisingly, the owners of these cars are none too happy when they discover that this towing crew is about to make off with their car. In fact, this particular business is so dangerous and confrontational that the ladies of Pink Hookers carry licensed handguns.

Other firms featured in the premiere of “Hustle & Tow” are Morgan Towing of Muskogee, Oklahoma (a towing company with an unexceptional name) and the more creatively named Towz R Us in Alaska.

The Oklahoma towing crew is tasked with uprighting and towing a semitrailer filled with concrete powder that skidded off a highway and ended up on its side.

Meanwhile in Alaska, a lone tow-truck driver has to venture out on an icy highway to pull a young woman’s car out of the roadside ditch she skidded into.

No one threatens him physically on this assignment, like the women of Pink Hookers in their confrontations with disgruntled illegal parkers in that apartment-house parking lot in Delaware.

But as this Alaska tow-trucker points out, the highway is icy and he must perform his work within inches of this slippery roadway with cars whizzing by at high speeds. Not to spoil the episode, but he frees this young woman’s car and gets her on the road again without injury.

And there is good news too: Her insurance company will cover the cost of the towing service, and all is well.