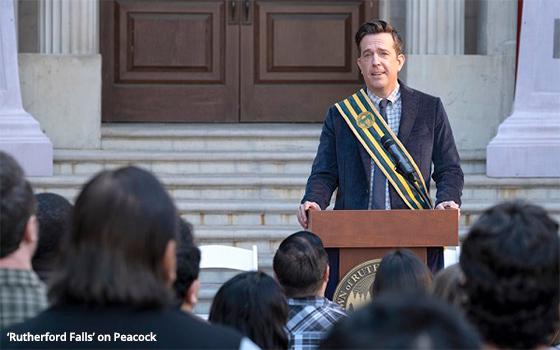 The new comedy “Rutherford Falls,” premiering on Peacock on Thursday, is a small-town sitcom with parts borrowed from here and there.

In the movie, Bedford Falls is not necessarily specified as being located in New York State, but it seems so -- especially since there is a real town called Bedford in Westchester County.

With its lighthearted take on small-town government and citizenship, “Rutherford Falls” might remind some of “Parks and Recreation.”

As towns of a certain size, Rutherford Falls and the fictional Pawnee, Indiana, in “Parks and Rec” no doubt have issues in common.

One of the issues is historical -- namely, the relationship between each town and the Native Americans who once lived on the sites where the towns were founded.

This issue formed the basis for some of the comedy on “Parks and Recreation,” and in “Rutherford Falls,” the Native American tribal community is a major player in the area, thanks to the huge casino it owns and operates.

The town’s founding is symbolized chiefly by a statue of the original Rutherford who is credited with negotiating the purchase of the town’s land from local tribes.

The statue-as-town-symbol theme is one that is familiar to fans of “The Simpsons,” in which the centrally located statue of Springfield founder Jebediah Springfield has long enjoyed a prominent position in the show’s opening title sequence.

However, in “Rutherford Falls,” the Rutherford statue stands smack in the middle of a major intersection in the town center.

As a result, cars keep crashing into it, and the current mayor wants to move it, despite strong objections from the only living descendant of the first Rutherford who is still living in town, Nathan Rutherford, played by Ed Helms (pictured above). Helms is also credited as a co-creator of the show.

This is basically the premise for “Rutherford Falls” -- this descendant of the founder seeks to have the town and its people pay more proper homage to its history and heritage. But for the most part, the townsfolk are ambivalent at best.

“Rutherford Falls” is a mild, inoffensive sitcom whose heart is in the right place.