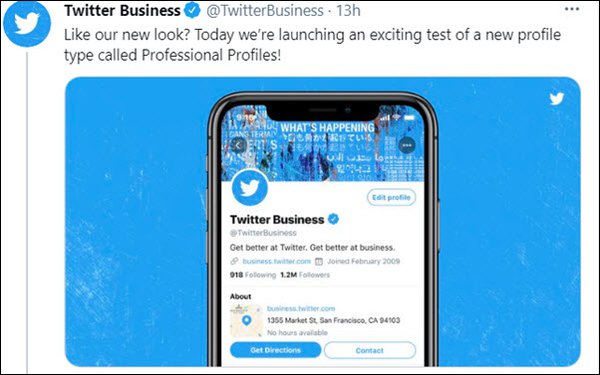 Twitter has revealed that it’s launching a live test of “Professional Profiles” — a new format that will allow brands, along with publishers and creators, to display specific information about their businesses directly on their profiles.

Twitter first mentioned that the customizable module format within Twitter Business was in development at its Analyst Day in February.

Now, the platform has tweeted that its test is starting with a small pool of businesses in the U.S., with access to the profiles given to more accounts in the coming months.

Twitter also asked businesses to weigh in on what kinds of features they would like to see in the profile, as it continues to be honed.

In March, Twitter released a concept layout for the profile that also included a business’s app/App Store link, telephone number, a shop with a preview of items for sale, an image gallery, a showcase of pinned tweets, and customer reviews.

The testing and user input will, of course, help guide which features are actually incorporated in the final format.

The new Twitter offering could enable the platform to establish a new, reliable revenue source, as well as provide a monetization tool for businesses, including SMBs.

In recent months, Twitter has been testing "shoppable" tweets, and a Nielsen integration to improve advertisers' ability to measure audience delivery and outcomes for Twitter videos.

Twitter is among the tech giants set to report Q1 results next week. Analysts have said that diversifying its advertising revenue base to include more direct response, as well as how successful it is at attracting more SMBs via its revamped MAP platform, will are key factors in its performance going forward.