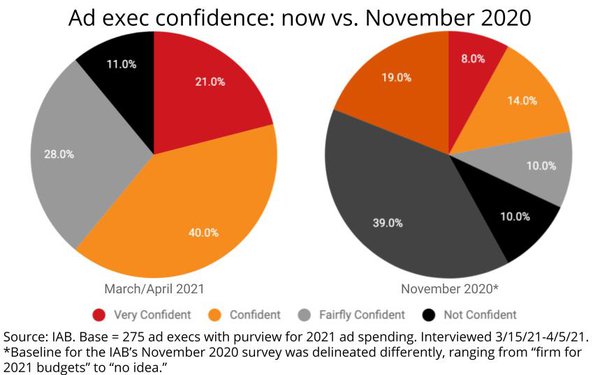 U.S. advertising executives with a "purview" for 2021 ad spending -- both advertisers and media agency planners and buyers -- are significantly more confident about their ad budgets for the duration of this year than they were when surveyed late last year, according to the latest edition of a tracking study by the Interactive Advertising Bureau (IAB).

Sixty-one percent of the 275 executives interviewed by the IAB in March and April said they are either "very confident" or "confident" in the "stability" of their ad budgets for the remainder of this year.

While the IAB delineated responses differently to a similar question asked in November 2020, the trade association's analysts implied it's a marked improvement in ad executive confidence. (In the November 2020 interviews, the IAB outputted the responses on a six point scale ranging from "firm 2021 full year budgets" to "no idea," see our coverage here.)

"Ad buyer optimism for 2021 has increased in just the past five months," the new IAB report asserts, adding, "Confidence in 2021 ad budgets has reduced the need for frequent re-examination and reallocation of spend, which was common in 2020 (see data below).

In November 2020, 29% of ad execs said they were reviewing their media budgets monthly vs. only 15% currently. 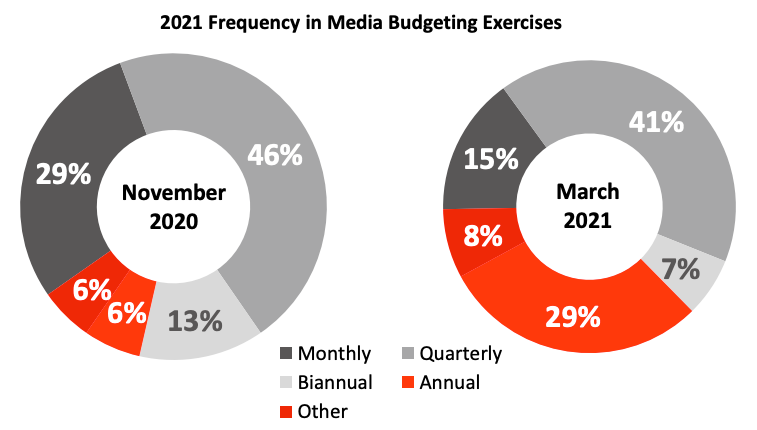