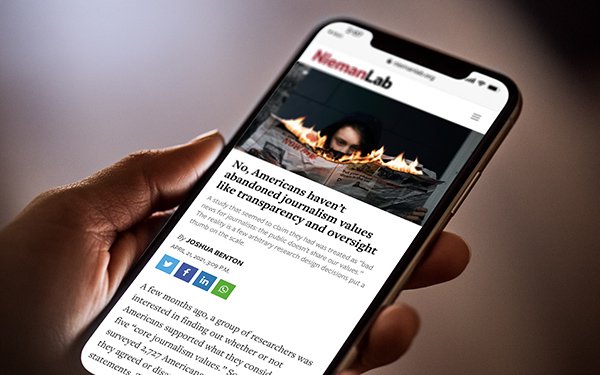 An article in Nieman Lab takes serious issue with a study on consumer trust in media, released last week by the Media Insight Project, and the coverage it received.

The study was widely reported with headlines that emphasized “Bad News for Journalists.”

But the reality is “a few arbitrary research design decisions put a thumb on the scale,” Joshua Benton argues in a piece titled, “No, Americans haven’t abandoned journalism values like transparency and oversight.”

For instance, the Washington Post’s Margaret Sullivan wrote the journalistic value drawing the least support is “the idea that a good way to make society better is to spotlight its problems. Only about 3 in 10 agree.”

But Benton points to survey stats showing 27% strongly agree with that line, 27% moderately agree and 18% slightly agree, adding up to 72%.

Moreover, headlines about bad news for journalists are bogus, he adds. At the least, they are “unsupported by the methodology in use here,” Benton asserts. “There is no reason to believe, based on this data, that Americans have somehow abandoned the basic values of democratic governance, or that we noble journalists are left to fight the lonely fight for accountability.”

MediaPost also covered the survey, with the headline: “Study: Not All Readers Share Journalism’s Core Values.”

Another problem is the study “doesn’t even try to measure journalists’ values,” Benton continues.

Benton seems to be less critical of the clustering of respondents into four groups: The Upholders, The Moralists, The Journalism Supporters, and The Indifferent, based on their response to tweaked versions of news stories.

“While I might not use those names — labeling 20% of the population “The Journalism Supporters” falsely implies the other 80% don’t support journalism — it’s a rich set of data to play with.”

The Media Insight Project had not responded to a request for comment at press time.

The Media Insight Project is a joint venture of the American Press Institute and the Associated Press-NORC Center for Public Affairs Research.