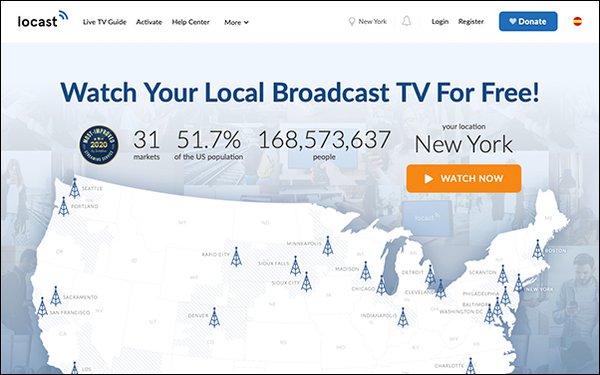 Pressing their claims that streaming service Locast infringes copyright, television broadcasters told a federal judge Friday that Locast isn't entitled to rely on a provision in the copyright law that allows nonprofits to boost TV signals.

The broadcasters also say Locast doesn't qualify for the exemption for other reasons, including that it allegedly gains “valuable data” and other commercial advantage from its service.

The television broadcasters' letter to Stanton comes nearly two years after they sued Locast for allegedly infringing copyright by streaming over-the-air television shows without licenses. The broadcasters are seeking an injunction that would prohibit Locast from streaming TV programs, as well as monetary damages.

Locast, created by the nonprofit Sports Fans Coalition NY, launched in 2018 with broadcast feeds from 13 stations in the New York City area. The company since expanded to include feeds from 26 markets.

Locast's service is free, but the company requests donations of at least $5 a month.

The company contends it's protected by a provision in the Copyright Act that allows nonprofits to boost antenna signals.

But the broadcasters say that provision doesn't apply for several reasons, including that Locast allegedly can transmit programs beyond local markets.

“There is no genuine dispute that Locast’s internet-based service has global reach,” the broadcasters write. “It is no answer for defendants to argue that Locast uses “geo-fencing” technology to limit its transmissions to particular markets. Even if Locast’s geo-fencing technology were error-free and immune to circumvention (it is not), the fact that Locast uses it only underscores that its service is not inherently localized.”

The broadcasters also argue that Locast doesn't qualify for that exemption because the company gains a commercial advantage from the service.

“Locast has leveraged its unauthorized internet television service for a number of other commercial purposes -- including enhancing its name recognition and that of its founder, collecting valuable data, and conferring benefits on pay-television companies that support Locast,” the broadcasters write.

AT&T donated $500,000 to Locast in 2019, and Locast's founder, David Goodfriend, is a former Dish Network executive. The broadcasters said in their original complaint that AT&T and Dish “provide Locast with valuable nationwide distribution of the Locast app on the internet-connected set-top boxes of their subscribers.”

The broadcasters also argue to Stanton that the $5 monthly donations sought by Locast are actually “fees” for service, which disqualify the company from relying on the copyright exemption granted to nonprofits that boost signals.

“Following an introductory period, Locast interrupts a user’s television stream every 15 minutes on a given channel with an advertisement asking the user to pay $5 per month (which Locast labels a 'donation'),” the broadcasters write. “If the user does not agree to pay the monthly charge, he or she is sent back to Locast’s program guide and must navigate back to the channel he or she was watching.”

Locast countered Friday in its own letter to Stanton that more than half of its active users don't make donations.

The company also says there's no evidence that it gains any commercial advantage.

“No one owns [Sports Fans Coalition NY],” Locast argues. “It pays no dividends, no distributions, and no salaries. It pays typical, market prices for its costs, such as physical space, equipment, technical upkeep, and internet access.”

Locast additionally says broadcasters haven't shown that the company has had a specific impact on retransmission consent negotiations.

“The bulk of the evidence shows that the Locast service likely harms pay-TV platforms because it encourages cord-cutting, which plaintiffs admit harms companies like Dish and AT&T,” Locast contends.

Locast and the broadcasters are asking Stanton to hold a conference in the case before May 6 -- the deadline for both sides to file written motions seeking summary judgment.