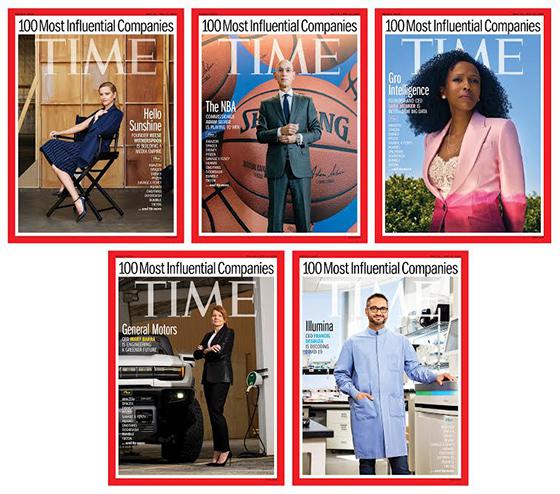 Time has moved into the B2B arena, debuting Time Business and its first list of the Time 100 Most Influential companies.

The goal is to cover “the global impact of business and the ways it intersects with our public and personal lives,” writes Edward Felsenthal, CEO and editor in chief of Time.

Felsenthal adds: “It’s hard to recall a moment when the corporate world has had a greater influence on our lives than it does now.”

For the Top 100 list, Time evaluated each nominated firm for relevance, impact, innovation, leadership, ambition and success. The nominations came from editors and industry experts.

The debut listing is accompanied by five covers, each highlighting a CEO from a company on the list, and each featuring an in-depth profiles. They are:

This year’s leaders include NBA (“growing a global game”), Apple ("doubling down on defining products”), Delta (“Thinking ahead”), Walgreens (“vaccinating the vulnerable”) and Pfizer and Biontech (“immunizing the world”).

The technology leaders on the list include Nubank, Alibaba, Mastercard, Robinhood Stripe and Flutterwave, and cybercurrency firms Digital Currency Group and Coinbase.

In addition, there are several entertainment companies, including Netflix, Spotify, TikTok, HYBE and Disney.