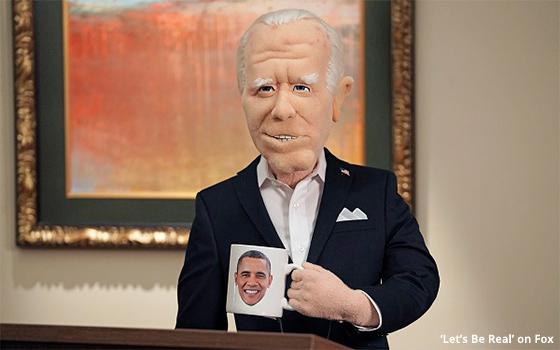 President Biden is a meandering narcoleptic and Donald Trump is a conniving loudmouth in “Let’s Be Real,” a semi-new Fox series coming this week in which both politicos are played by pillowy puppets.

The show can be classified as “semi-new” because it actually made its debut as a one-off special last October a few weeks before the election that unseated President Trump after a single term.

At some point after the airing of that show in the months that followed, Fox evidently decided to make more of them.

As a result, this time around, “Let’s Be Real” is scheduled to stick around for at least four new, half-hour episodes, starting with the first one this Thursday night (April 29) at 9:30 Eastern.

The photo above of the Biden puppet clutching a Barack Obama coffee mug is from last fall’s episode, which is available to watch on Fox.com.

The series’ upcoming episodes are not available to TV columnists, which means that all we have to go on to assess this series is the one episode from last fall.

According to Fox, the Trump, Pence, Biden, Harris and Kanye puppets will be seen again in the show’s upcoming episodes, along with new puffy puppet versions of Dr. Anthony Fauci, Andrew Cuomo, Ted Cruz, Kim Kardashian and LeBron James.

In some of the show’s bits, the puppets are joined by real, live people. For example, Larry King appeared as himself in last fall’s episode as a debate advisor for the Trump puppet -- in what may have been King’s last appearance anywhere. He died last January.

And sitcom stars Jackee and George Wendt played themselves as in-studio guests on a local Florida morning show -- “A.M. Sarasota” -- that was co-hosted by the Charlie Rose and Matt Lauer puppets.

Naturally, the sex-harassment scandals that appear to have ended Rose’s and Lauer’s careers were the focus of the satire in this segment as the two puppets tried to discuss the subject with their two real-life guests in an effort to excuse and minimize their behavior.

This was predictable comedy, as were the depictions of Biden as sleepy and confused, and Trump as a Twitter-happy egomaniac.

Veteran comedy writer Robert Smigel is credited as the executive producer and writer of “Let’s Be Real.”

It occurs to me that you cannot spell “Triumph” without “Trump,” but despite that truism, there is no sign yet that Triumph will turn up any time soon on “Let’s Be Real.”