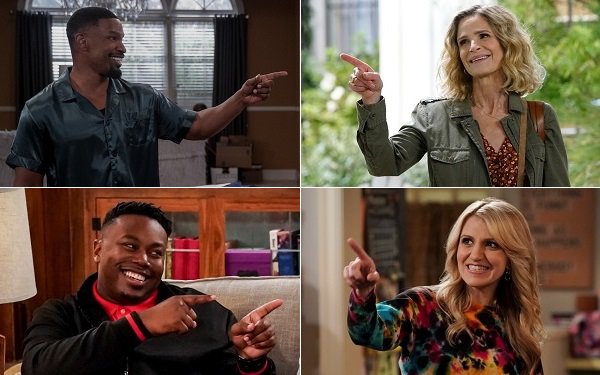 Those who have come to the conclusion that TV is pointless have never searched for network publicity photos.

In the troves of publicity photos that the networks and streaming services post on their proprietary web sites for the use of journalists who write about television, the finger-pointing photo is a common image to come across.

For example, it did not take all that much time to assemble the four finger-pointing pictures assembled above for this TV Blog (clockwise from upper left): Jamie Foxx in “Dad Stop Embarrassing Me” on Netflix, Kyra Sedgwick in “Call Your Mother” on ABC, Annaleigh Ashford in “B Positive” on CBS, and Marcel Spears in “The Neighborhood,” also on CBS.

Finger-pointing photos like these are more commonly associated with TV comedies, although they have been spotted from time to time among TV’s drama-series pictures too.

In the dramas, the pointed finger is more accusatory and definitely not comedic. Mostly, you see pointed-finger photos in the context of police dramas in which the finger is pointed in anger at a suspect or perp.

While the comedic finger-pointing photos on the TV press sites are common enough to be labeled a comedy cliché, they are still often used on these TV blogs for that very reason -- i.e., they are very typical of TV sitcoms and therefore highly appropriate as illustrations on sitcom blogs.

As such, they are somewhat rare. Here is a truism I have observed from years and years of searching for, and then choosing, TV publicity photos to go with my work (both here at MediaPost and at a number of other places long before): Photos provided by networks to go with coverage of comedies and dramas are rarely comedic or dramatic (respectively).

I guess I have higher expectations than I should have when I go in search of photos. When it comes to comedies, I expect (or at least hope for) a wide selection of photos of people actually doing funny things -- pratfalling, for example, or making funny, exaggerated faces.

Or I want to see a sitcom’s characters in some absurd situation, like being trapped in an animal enclosure at the zoo or, one of my favorites, seen in the front passenger seat of a car with a frightened expression while another character who cannot drive is behind the wheel.

Where the dramas are concerned, I seek pictures that are dramatic -- police with guns drawn, a still photo from a high-speed chase, or an angry confrontation of antagonists in a courtroom.

Let the record show that I have come across all of these kinds of photos at various times, and they are the ones I choose to use most often.

At the same time, however, the vast majority of the photos offered for both comedies and dramas consist of two people basically talking to each other. And where is the fun or the drama in that?