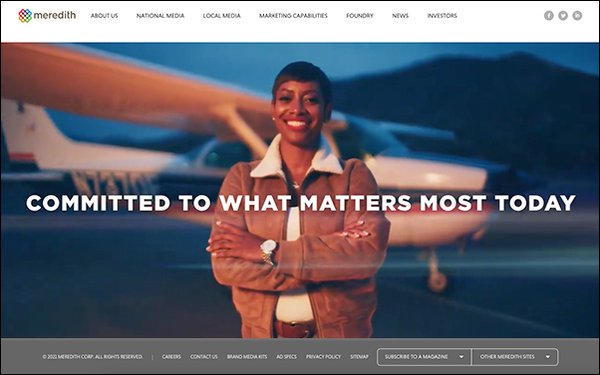 On the plus side: It is up for the first nine months, and digital advertising is expected to soon surpass that of magazines.

The publishing giant reported a 5% downturn to $665 million in the third quarter. But it achieved a 1% increase year-over-year to $2.3 billion.

Combined magazine advertising, subscription and newsstand revenues fell by 19% in Q3. Ad sales suffered from lower-than-anticipated performance in the food and beverage and prescription drug verticals.

However, the publisher has a stable 36 million rate base. There was also a 21% in National Media Group digital advertising revenue in Q3, and a 17% boost in sessions, led by People, Allrecipes, Southern Living and Martha Stewart.

In addition, Meredith reports a 31% in National Media Group licensing/digital and other consumer-driven revenues. This was driven by Apple News+, strong sales of Better Homes & Gardens-branded products at Walmart, and performance marketing via retail partners.

"Our mature media performance was mixed as local media nonpolitical spot advertising revenues exceeded our estimates, while magazine advertising revenues were adversely impacted by clients that continue to be affected by the pandemic and resulting uncertainty,” states Meredith CEO Tom Harty.

“We expect full-year fiscal 2021 National Media Group digital advertising revenues to surpass magazine advertising for the first time in our history,” he adds.

Earnings from continuing operations were $270 million for the first nine months, versus a loss of $215 million. And for Q3, earnings totaled $79 million, compared to a loss of $289 million.