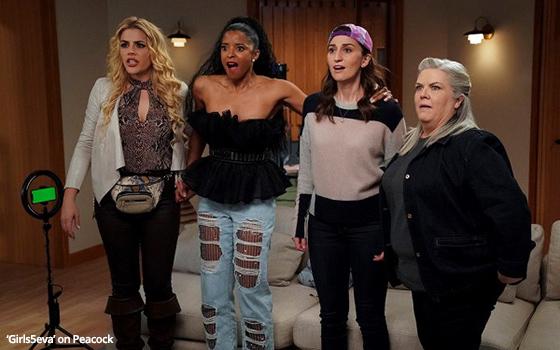 Tina Fey does it again.

This time, the producer whose name is on a long list of (mostly) superlative TV comedies, is now involved in a new one that takes on issues such as aging, loss, nostalgia and recapturing the spirit of youth that deserts many of us in middle age.

These are all serious subjects, but at no point does this new show -- titled “Girls5eva” and premiering this week on Peacock -- ever forget it’s a comedy.

The title is composed purposely to be nonsensical. It is the name of a fictional girl group that became world famous for about a year-and-a-half around the turn of the new millennium.

The name of the group is pronounced as one word: “Girls-Five-evuh.” It is evidently a play on the words “Girls Forever,” but they went with five-ever because the group originally had five members.

After their fame soared and then crashed, the five went their separate ways into lives of relative obscurity. One them even died in an infinity pool accident (according to an explanation provided at some point in the series’ first episode).

But now, as the show opens in the present day, a famous rapper named Lil Stinker has adorned his new hit single with samples from Girls5eva’s biggest hit from 20 years before.

And before you know it, the four surviving members of the group are invited on Jimmy Fallon’s “Tonight Show” to sing backup for the rapper.

This experience has the four thinking about reuniting as a way to reinvigorate their lives.  And that’s the show.

Meredith Scardino is given the most prominent credits on this series as creator and lead executive producer.

But Tina Fey and her long-time producing partner, Robert Carlock, are also listed as executive producers on the show. Their track record (including “30 Rock” and “Unbreakable Kimmy Schmidt,” two of their better shows) has likely put them in a strong position when it comes to luring top talent to their new shows.

For this one, they succeeded in corralling an incredible foursome to play the members of “Girls5ever”: (pictured above, left to right) Busy Phillips, Renée Elise Goldsberry, Sara Bareilles and Paula Pell. They gel perfectly.

Goldsberry is a Tony Award winner for “Hamilton,” and Bareilles just might be the most talented woman alive today, period. But here they are in a TV sitcom. Their presence qualifies as a casting coup.

The show’s supporting players are just as strong -- most notably Jeremiah Craft in the role of Lil Stinker and, in an upcoming episode, Stephen Colbert as you have never seen him before.

“Girls5eva” is a top-drawer production for the still-relatively new Peacock streaming service. It is a symbol of the way in which the emphasis has shifted from legacy networks to streaming services at the big TV companies (in this case, NBCUniversal).

Not too long ago, “Girls5eva” would have been a shoo-in for inclusion somewhere on the NBC lineup. But not this time. Instead, it streamed on over to Peacock.