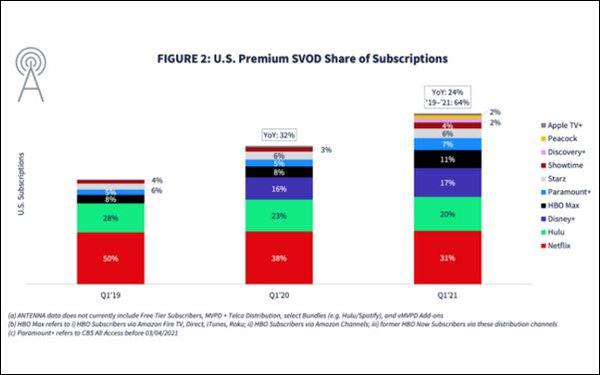 The subscription video-on-demand market has experienced  “staggering” disruption since Disney+ launched in November 2019 — and the growing number of players continued to shake things up through this year’s first quarter.

With Discovery+ and Paramount+ — the last of the major new premium streamers (for the moment, at least) — in the game as of fourth-quarter 2020, total U.S. subscriptions in Q1 rose 24% on a year-over-year basis, and 6% versus Q4, according to Antenna. 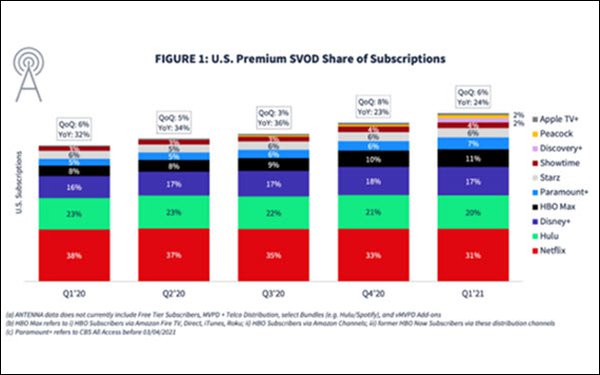 The continued strength of the collective growth curve in the U.S.  — without factoring in what we know to be considerably more robust growth in international markets — is in itself pretty remarkable.

As for the players, while Netflix continues to downplay the impacts of competition on its business, those two years have seen the leader of the pack’s U.S. share plunge from 50% to 31%, according to this data.

The four other premium SVODs that were in-market two years ago — HBO Now (now HBO Max), Showtime, Starz and CBS All Access (now Paramount+) — still command about one in four subscriptions. But to maintain that share level in the face of new competition, they have had to scale up significantly, achieving 100% growth during the period.

Disney+, Discovery+, Peacock and Apple TV+ now account for 22% of all U.S. subscriptions. Disney+ has driven 44% of all category growth since Q1 2019.

As we know, the growing array of streaming choices has accelerated cord-cutting. The cable and satellite MVPDs representing 95% of the market collectively lost a record 5.9% of their subscribers last year, versus 5.2% in 2019, according to Leichtman Research Group.

But here’s where Netflix continues to have a crucial edge: While other services has experienced growing churn as the field of choices has widened,  Netflix's customers have remained highly loyal. 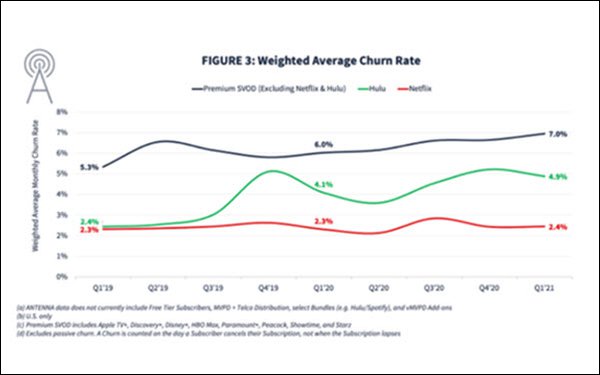 Over the last two years, the premium SVODs excluding Netflix and Hulu have seen average monthly subscriber churn rise from 5.3% to 7%.

Hulu’s churn rate has doubled, from 2.4% to 4.9%. That in part reflects pricing. Its churn rate leapt to over 5% in Q4 2019, coinciding with Hulu’s raising the price of its Hulu Plus Live TV service for the second time that year. Hulu’s inclusion in the Disney+ bundle and other factors, including  promotions, no doubt also played roles in its churn trends over the period. But growing competition was also one a factor in the mix.

Meanwhile, Netflix’s churn rate has barely budged, rising by a miniscule 0.1% over the eight quarters.

Netflix also leads the industry in resubscribe rate — meaning it’s more likely than its rivals to win back subscribers who cancel.

That’s a heap of change in two years.

And, as Antenna notes, the race is bound to get more interesting in the coming months, as the more recent entrants gain their footing, and the various players implement, adjust and perhaps shake up their various programming, pricing, bundling and distribution.