Ad Council Wants Middle Schoolers To 'Sound It Out' 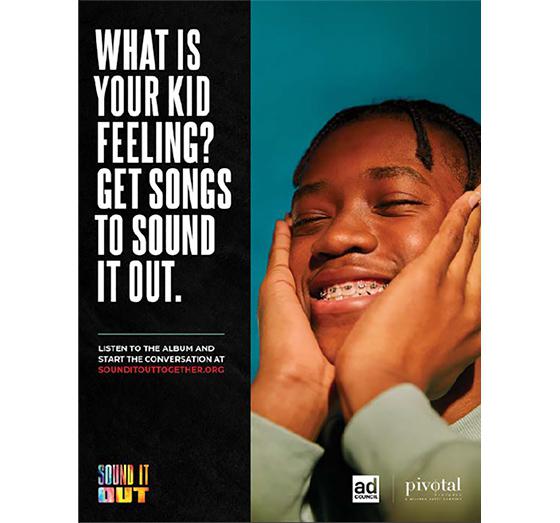 With conversations with young people about their emotional health and wellbeing typically being difficult, The Ad Council is collaborating with Pivotal Ventures, an investment and incubation company created by Melinda Gates, to get middle schoolers to open up about their emotions.

Developed by McCann with support from Casanova//McCann and EGAMI Group, music artists were paired with middle schoolers and their caregivers to engage in authentic, intimate conversations that then inspired the artists to write and record original songs. Participating artists include Empress Of and KAMAUU.

Facilitated by mental health experts, the songs are designed to be “musical translations” of the kids’ emotions and experiences.

This approach resulted in an exclusive album, music video, and “behind the scenes” video footage that will be featured on the campaign website, across music streaming platforms, and in PSAs that will appear in donated media nationwide.

“Getting middle schoolers to open up about their emotions can be hard, but music is a powerful medium that helps us put our thoughts and feelings into words,” says Heidi Arthur, Chief Campaign Development Officer at the Ad Council. “When we can’t find a way to say it, there’s probably a song that can.”

The messaging directs visitors to SoundItOutTogether.org, a new website offering conversation-starting resources, including an interactive lyrics tool so caregivers and kids can use to further explore their emotions together while listening to the album.