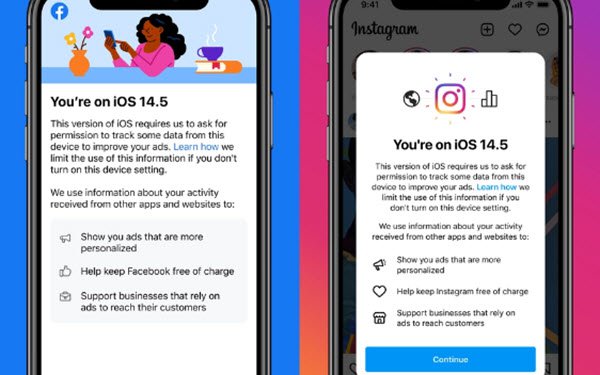 In its most recent move in its battle against Apple’s iOS 14 privacy update, Facebook has added notices to the iOS apps for Instagram, as well as the flagship social platform, telling users that allowing their data to be collected will help keep the services free.

Facebook first explained the messaging update in a little-noted blog post on April 26, the day that Apple’s update went into effect.

“At Facebook we use data to provide personalized ads, which support small businesses and help keep apps free,” states the post. “Starting today, Apple will require apps that engage in what it calls ‘tracking’ to ask permission when using information from apps and websites owned by other companies to personalize or measure ads. This will happen through a prompt designed by Apple that discourages people from giving their permission, and provides little detail about what this decision means.”

“As Apple has said that providing additional context is allowed, we will show an educational screen before presenting Apple’s prompt to help people make an informed decision about how their information is used. It provides more details about how we use data for personalized ads, as well as the ways we limit the use of activity other apps and websites send us if people don’t turn on this device setting. Our screen also lets people know that they’re seeing Apple’s prompt due to Apple’s requirements for iOS 14.5.”

Facebook once proclaimed that the platform would always be free, but has since dropped that language. In 2018, CEO Mark Zuckerberg told Congress that their would always be a “version” of Facebook that is free, notes The Verge.