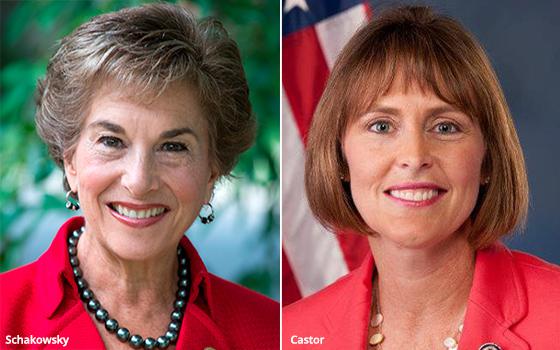 Two House Democrats have introduced a bill that would require social media platforms to post and implement content-moderation policies.

The “Online Consumer Protection Act,” unveiled by Reps. Jan Schakowsky (D-Illinois) and Kathy Castor (D-Florida), would also revise Section 230 of the Communications Decency Act by allowing the Federal Trade Commission to bring enforcement actions against tech companies that fail to adhere to their content policies, and by empowering consumers to bring private lawsuits.

Section 230 of the Communications Decency Act generally provides that web companies aren't legally responsible for material created by third parties -- including advertisers. That law currently has some exceptions, including ones that apply when third parties post content that infringes copyright or violates a federal criminal law.

The bill, introduced Friday, would explicitly revise Section 230 by creating another exception for material that violates any laws enforced by the Federal Trade Commission.

The proposed law would also require online marketplaces to post and implement policies regarding merchandise offered for sale, as well as policies that outline how consumers can report violations and request refunds.

The Schakowsky-Castor bill is just one of numerous recent proposals to revise Section 230, which has recently come under intense scrutiny.

Whether Congress will advance any legislation relating to Section 230 is unclear, given that Democrats and Republicans appear divided on how social media companies should moderate content. Several Republicans have argued that social platforms suppress too much speech, but Democrats in Congress have argued that tech companies don't filter out enough material -- including speech that's legal but problematic, such as hate speech, or posts with misleading scientific information.

In recent years, some web users who were suspended or blocked by social media platforms have sued attempted to sue the companies over the moves -- often arguing that the platforms didn't follow the procedures outlined in their terms of service. Those lawsuits haven't gotten far in court.

For instance, Canadian journalist Meghan Murphy sued Twitter after she was banned for misgendering people -- or referring to transgender individuals by their biological gender at birth. Among other allegations, she said Twitter only banned misgendering in October of 2018 and didn't give her 30 days' advance notice of the changes. Twitter's terms of service say the company will notify users about some revisions at least 30 days before they take effect.