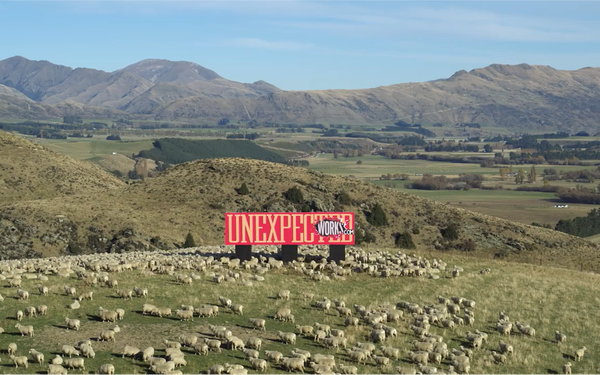 DDB Worldwide has unveiled an updated brand positioning that includes a billboard running in one of the least expected places imaginable: a sheep farm in Garston, New Zealand (Population: 100 humans, 40,000 sheep).

According to the agency, the idea is to showcase creativity at its most powerful--when it's unexpected.

“The formula for creating breakthrough creative work that drives business results is timeless,” DDB Worldwide Chief Creative Officer Ari Weiss said. “It’s how we bring that formula to life that changes on a daily basis. We’re not reinventing the wheel here. We’re simply putting more focused language around a truth that anyone who has ever worked at DDB can feel in their bones: Unexpected Works.”

“Unexpected Works” is the agency’s new tagline. It and other details of the brand refresh were revealed at DDB’s first-ever all-staff conference held virtually for its 10,000 staff around the world.

More details on the effort can be found here.