Gen Z May Be Challenge For Video Streaming Services 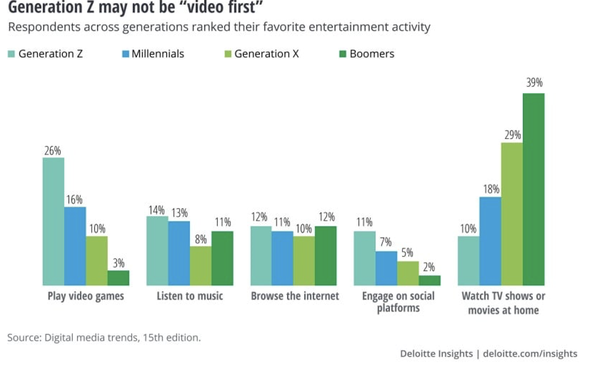 A study by Deloitte in April 2021 asked respondents what their favorite entertainment activity was, broken out by generation. Watching TV shows or movies came in last for Gen Z with only 10% picking those activities, while playing video games came in first, with 26%.

We can see a direct relationship between generational age and watching TV/movies, and an inverse one with playing video games. Age is likely a driving factor of some of these media consumption habits, but the recent boom of the video game space also suggests this is a generational distinction as well. In other words, an affinity for video games will likely stay with Gen Z consumers as they age and challenge the dominance of TV/OTT as the primary form of entertainment.

Another layer the Deloitte study touched on was consumption of news by generation. We again see generational age has a similar direct relationship with network/cable news, and an inverse relationship with news from social media. This is significant since over the past year, even as linear took huge hits, one of the only bright spots in viewership was content relating to the news election cycle. And as the news shifts to OTT, Gen Z may not turn to the big screen in large droves, instead continuing to primarily use social media.

The formats of the ads themselves on different platforms also come into play. From the same study, 35% of Gen Z respondents found ads on social media to be “most memorable,”  compared to only 18% when asked about ads on streaming video.

On the flip side, only 17% of those same respondents found ads on social media to be “most annoying,” versus 27% for ads on streaming video.

Comparing all generations, Gen Z had the largest differential in ad “likeability” between these two advertising channels. This is could be due to the fact that they likely enjoy spending more time on social media overall. However, they could also truly find the format of social media ads far more preferable to streaming video ads and retain that preference as they age.

The Deloitte study reinforced that there are vast differences across generations in preferences for media format, content, and ad format at the very least. The more significant question is how much Gen Z will hold on to these preferences as they age. If affinity for video games and social media persist at their current levels, this could be a significant challenge to video streaming services.