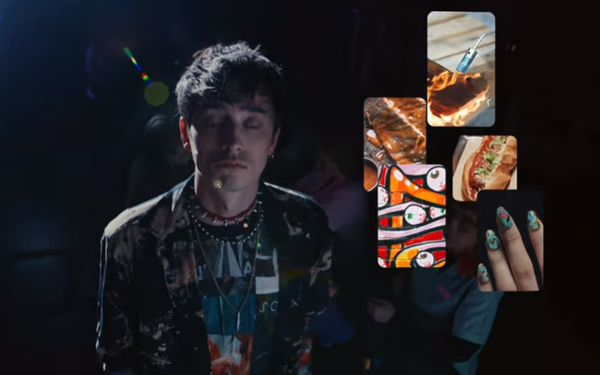 In a bid to broaden its perception beyond a site to post food and DIY pics, Pinterest is now positioning itself as the "visual inspiration platform," taking the wraps off of a new global ad campaign.

The campaign is from Accenture creative agency Droga5 and Interpublic Group’s media agency Mediahub. The agencies say its unveiling comes just as people are beginning to re-evaluate their post-pandemic lives and how they will spend their time.

It also arrives after stellar growth for the platform. In the past year, with people stuck inside and consuming much more content, Pinterest claims it gained over 100 million users worldwide to 475-plus million monthly active users.

As people emerge from a year of chaos and uncertainty, the campaign is designed to showcase how Pinterest can feed them new exciting and fulfilling ideas to act on. As the creative notes, “You just might surprise yourself.”

“On Pinterest, you may come to explore mid-century modernism, find maximalism and end up loving cluttercore,” says Celestine Maddy, global head of consumer and brand at Pinterest. “Our campaign defies the perception that Pinterest is just recipes, DIY projects and wedding dresses, and instead is an invitation to invest in discovering something new or try something you’d never thought you’d try,” she adds.

The anchor film, titled “Discovery,” was shot in Mexico City and Los Angeles and takes the audience on a fast-paced journey of exploration focusing on one woman’s discovery before branching out into an unbroken, energetic thread of other characters' experiences.

It and other spots will be placed in markets around the world across a wide array of media channels including OOH installations in New York, Chicago and London.

There are also media partnerships with CRWNMAG, a hair culture and lifestyle magazine for Black women, and NTWRK, a mobile-first video shopping platform that blends entertainment and commerce.

John Moore, Global CEO at Mediahub said his team designed a plan with “high-impact media presence, [and] meaningful and diverse partnerships, and targeted activations that show the true breadth and depth of ideas available on the platform.”

Pinterest is also launching a similar brand campaign in Japan this week.