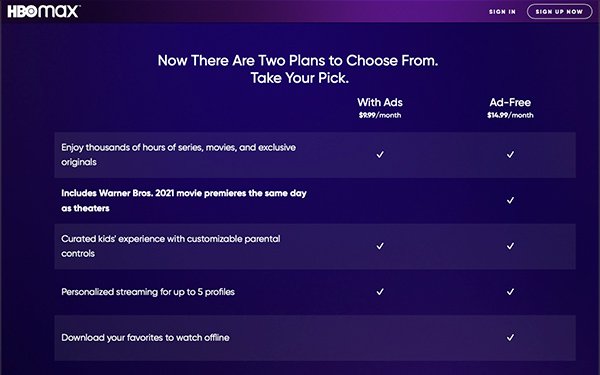 WarnerMedia’s HBO Max says it has signed up 35 advertisers for its new ad-supported option launching today at a $9.99/month price tag. This compares to its original ad-free subscription $14.99/month deal.

As with other premium streaming services offering cheaper ad-supported options, it will have a limited number of commercials versus live, linear TV network viewing -- four minutes of ad time per hour.

For those 35 advertisers that have signed up to date, HBO Max says there are 72 creatives currently housed for campaigns.

Back in March, WarnerMedia said it had $80 million in upfront advertising commitments for a planned June launch.

While it did not go into specifics concerning individual advertisers, the company said two “brand block” partners in auto and insurance have enlisted. It did say frequency-capping technology will prevent viewers from seeing the same ads over and over.

Commercials will not play during HBO programming -- just before and after. HBO Max says: “Subscribers can expect to see greater personalization in the ads they do see with more innovation in formats to come.”

The HBO Max ad option will offer limited programming choices versus its higher-priced subscription service. While original TV programming will be included, new, same-day release of theatrical movies for 2021 will not be available. Those films will be available in the months following their theatrical releases.