Revealed: One Of The Achilles Heels of TV Reviewing 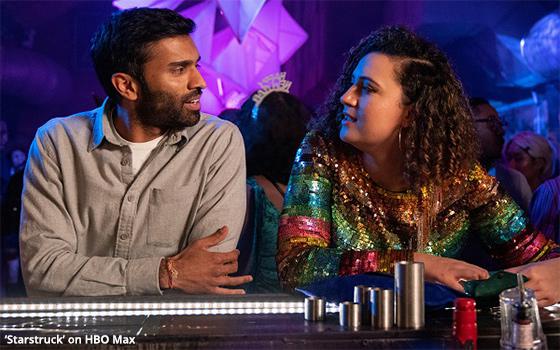 A new comedy premiering this week on HBO Max underscores one of the key weaknesses inherent in the task of reviewing TV shows for a living.

And that is this: TV shows that are not made with the reviewer’s demographics in mind -- meaning age, gender, ethnicity, nationality, geographic location and the like -- add an extra challenge to the effort of reviewing them fairly (to the extent that a piece of subjective, opinion-writing can be “fair”).

The comedy series that raises this issue today is called “Starstruck.” It starts streaming on HBO Max this Thursday.

It is about a young woman (played by Rose Matafeo, photo above, right) who has a one-night stand (or so it seemed) on New Year’s Eve with a young man (Nikesh Patel, also above) who turns out to be an international movie star, although she does not learn this until later.

In episode one, their relationship is only a day old when she discovers photos in his house that reveal -- at least she thinks they reveal -- that he has a girlfriend.

So she ghosts him, although there is reason to suspect their paths will cross again because if that did not happen, there would be no show.

And that’s the show -- a show about young, single people and their sex-and-social lives in East London, which is a place I know nothing about.

For that matter, I know next to nothing about the sex-and-social lives of young adults generally, whether in East London or East New York -- except for what I see on television.

Judging by the billing she is given in the publicity material for “Starstruck,” it is Matafeo’s show.

She is a New Zealand-born comedian described in the publicity material as “one of the most exciting new voices in comedy and is firmly fixed as the ‘voice of millennials’,” this last bit in quotation marks. And yet, big surprise -- I’ve never heard of her.

One wonders whether other comedians and humorists who have also been described as millennial "voices" will take umbrage at Rose Matafeo taking all the credit. On the other hand, it is doubtful any of them will read this.

The point is, what can I say about this show that has apparently been designed for younger people, and probably more for young women than young men -- making it even more remote from the life I happen to live?

It is a quandary I have thought about often in my TV-reviewing life, especially in the years since I aged out of the last demo I could claim to be included in (i.e., when I turned 55).

However, despite my advancing age, I do try to keep an open mind. Where “Starstruck” is concerned, I cannot really find anything wrong with it, but in the end, I will leave that judgement to its target audience -- young women (mostly) who are in a better position to assess its accuracy than I ever will be.